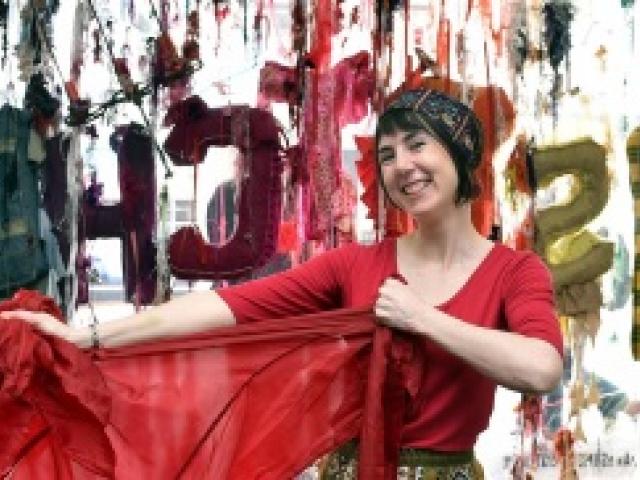 Co-founder of Dunedin eco fashion hub Just Atelier Fiona Jenkin tests the limits of material at the opening of the Unstitched: Local Fashion Revolution space in George St, Dunedin, yesterday. Photo by Peter McIntosh.
A pop-up fashion space in central Dunedin is encouraging people to consider the ethics behind the production and consumption of clothing.

Hub co-founder Fiona Jenkin said the project was about creating solutions to pollution, waste and poverty by raising awareness about clothing creation.

‘‘As a community, we can make a positive difference by making, mending and being creative.''

The pop-up space was a collaboration between the fashion hub and local gap-filling brokerage Urban Dream.

The space would be open to the public for a week, offering sewing, crochet, personal style and cross-stitch workshops for a gold coin donation, she said.

The organisation was formed in response to the collapse of a Bangladeshi clothing factory complex in 2013 which killed more than 1000 people.

Speaking at the opening of the space, Mayor Dave Cull said textile waste was a significant contributor to the Green Island landfill.

‘‘Textile waste management measures will contribute to the council's vision of Dunedin as a waste-free community.''

While Dunedin was already a leader of the New Zealand fashion industry, more education about upcycling and ethical purchasing would benefit everyone, he said.

Project co-founder Fi Clements said the space was available for all members of the public to learn how to lessen the burden on a world ‘‘smothered by textiles''.