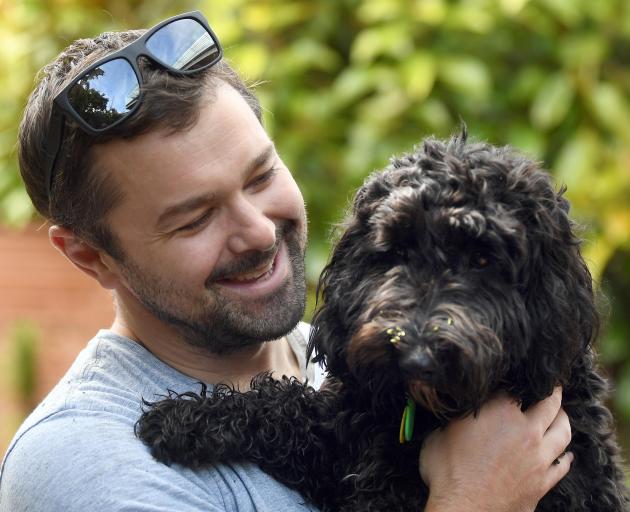 Sybil the spoodle is comforted by Dunedin man Gareth Lea after her big day out on Saturday. PHOTOS: STEPHEN JAQUIERY
It's being called Miss Sybil’s Big Day Out. 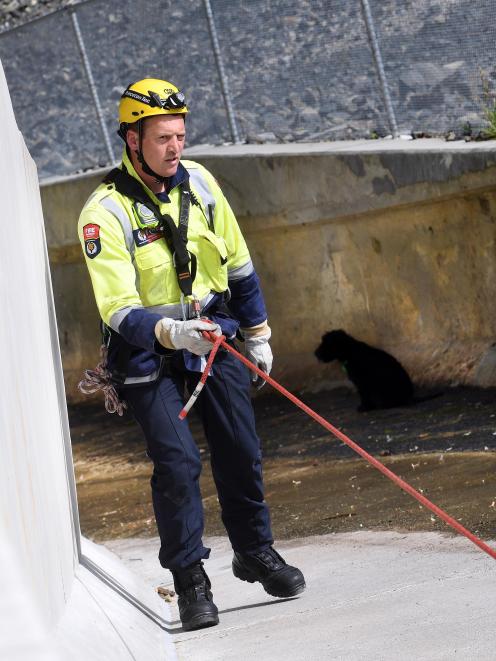 Willowbank firefighter Matt Burke abseils down the steep Ross Creek Reservoir dam’s outlet chute, heading for Sybil (pictured, background) during a rescue on Saturday afternoon.
But things soon escalated when Sybil made a dash for freedom, bolting out the front door and into the wild blue yonder of Highgate on a busy Saturday morning.

Within hours, Sybil was leading Mr Lea and his son Gareth on a merry chase, police were getting involved, firefighters were abseiling down dams and social media was lighting up.

"It just got bigger and bigger," a bemused Mr Lea told the Otago Daily Times last night, while recuperating with a beer in a spa pool.

"I think my career as a dog minder’s pretty well screwed."

The drama began about 10.30am on Saturday, when friends also staying with Mr Lea came home and opened a door — giving Sybil her chance.

The dog "bolted" outside and into traffic on Highgate, followed by the Leas in hot pursuit.

"We ran out and were stopping traffic and while we were doing that she just took off down the road."

The pair jumped into Mr Lea’s car and drove around Maori Hill, searching for the dog. They spotted her an hour later "sitting on the footpath" in Cannington Rd.

"We drove up to her and got out of the car, and then she bolted again. Then she sort

The search operation continued into the afternoon, as the pair drove around and word spread.

"As the afternoon wore on ... more and more people joined in. Then there was a picture of her put on Facebook, sitting on the roof of someone’s shed, in the sun, but the people didn’t post the address, so we couldn’t get there to find her.

"We eventually found the address and got there, but no — she was gone."

Eventually, about 2.45pm, word reached Mr Lea that a dog had been spotted, stuck half-way up the Ross Creek Reservoir dam.

"We all raced over there and when we got there there was like four firemen there, harnessing up — they were going to come down on ropes to get her — and there was a police officer there and a dog control officer, and numerous members of the public."

The elusive spoodle had been spotted half-way up the reservoir’s steep concrete water outlet chute, refusing to budge.

A member of the public had tried, unsuccessfully, to climb up, before calling emergency services.

"It’s as steep as the dam and she was about half-way up there."

As firefighters began their rescue operation, including abseiling down the chute towards her, a familiar voice finally did the trick.

The mother of Sybil’s owner turned up and called to the dog, encouraging her as she "slowly worked her way down".

"And then Gareth grabbed her."

Despite the drama, Sybil was not injured and was soon back to her old self before being reunited with her owner.

"But you could tell she’d had a big day," Mr Lea said, laughing.