Will goes above and beyond 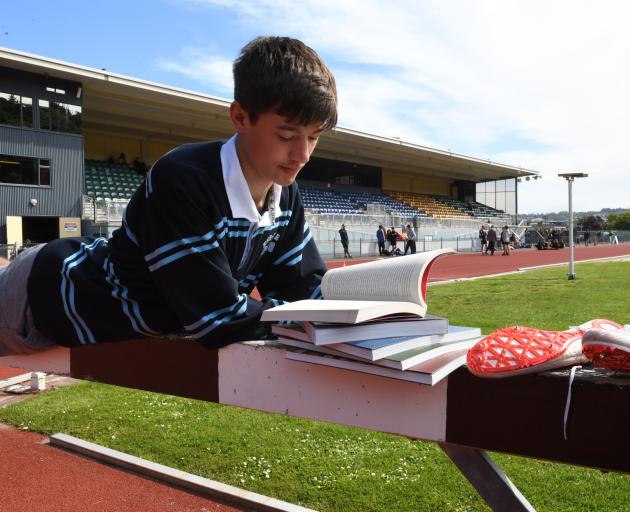 Former King’s High School dux Will Scharpf studied for and sat NCEA and New Zealand scholarship exams between races at the New Zealand secondary schools athletics championships in November last year. PHOTO: STEPHEN JAQUIERY
Will Scharpf had a lot on his plate during exams last November. So you can imagine his surprise when he was named one of the country's top 10 pupils in the 2018 New Zealand Scholarship exams.

Making the achievement all the more remarkable, he is still only 16 and he had skipped year 12 to sit the exams that usually challenge year 13 pupils.

The 2018 King's High School dux is one of 10 pupils across the country to win a New Zealand Qualifications Authority premier award for achieving outstanding scholarships in calculus, chemistry, physics, and statistics, and a biology scholarship in the New Zealand scholarship exams.

"I was pretty surprised to be honest. I didn't think I'd get it.

"It was a pretty hectic time but I quite liked having the athletics on at the same time because it gave me something else to focus on. It was a form of stress release.''

Will is now at the University of Canterbury studying engineering.

As part of his NZQA premier award, he will receive $10,000 each year, for three years, and will officially receive his award at Parliament on May 1.

Included in the 2018 NZ scholarship awards was former Otago Boys' High School pupil Hayden McAlister who won an outstanding scholar award after receiving several scholarships at "outstanding level''. He will receive $5000 for tertiary study each year, for three years.

Verdon College (Invercargill) pupil Samuel Cullen won a top subject scholarship award for gaining the highest marks in the music exam and gets $2000 a year, for three years.

They are among 9300-plus pupils who entered Scholarship exams last year in 35 subjects. Of those, 2415 were awarded one or more scholarships.