Without warrants for years

The council-owned town hall complex, which does not have a building warrant of fitness. Photos: Linda Robertson/Peter McIntosh.
The Dunedin City Council, the authority that administers building warrants of fitness, says two of its major buildings have been without warrants for years.

Despite that, the council says the Wall Street mall and the Dunedin Town Hall complex are "completely safe".

It has emerged the Wall Street mall has no warrant after "lax" advice on fire protection, and inspections that were not done.

The Dunedin Town Hall complex also has no warrant or code of compliance since a rebuild completed in 2013. 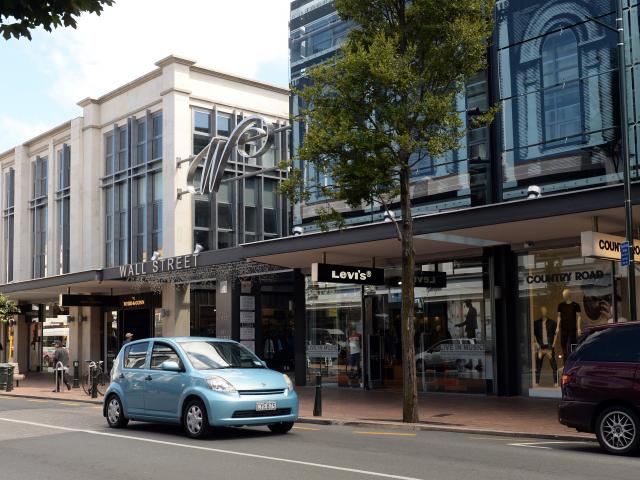 The council-owned Wall Street mall complex, which does not have a building warrant of fitness.
She said the issue appeared to be another case of poor contract management, like the South Dunedin mud-tank issue, though that was denied by council infrastructure and networks general manager Ruth Stokes.

Ms Kerr said she sent her LGOIMA request, asking if the buildings had warrants of fitness, after she received information from building industry sources and people who worked at Wall Street mall "who have known about this for years".

The response said Wall Street did not.

Instead, a "letter in lieu" had been issued confirming systems in the building were working and compliant.

The letter had been issued because a full 12 months of daily inspections had not been completed.

Since July 2015, however, daily checks had been done, and "this will not be an issue for subsequent warrants of fitness".

Council property manager Kevin Taylor, in a report on the issue to chief executive Sue Bidrose released with the LGOIMA response, said the property department had used an outside contractor to administer and manage warrant of fitness compliance on council properties, in particular the Wall Street mall.

Mr Taylor said audits showed before Logic FM took over "advice may have been too lax or liberal in assessing the building’s compliance with particular codes, specifically around fire protection and fire cells". Inspections had not been done by the previous contractor, leaving "gaps in the compliance processes".

But the report said Logic FM, once it took over the work, was too strict in its interpretations.

It said the company had been "interpreting code compliance components beyond that required by the law".

The council had since brought inspections "in-house".

"The code is the code; it’s relatively black and white."

The suggestion the company was over-cautious was "completely incorrect".

Mr Pont said the company’s dispute with the council was over a firewall at the mall.

There were a number of "penetrations" in the firewall from pipes and ducts.

Under the code, a fire wall with such penetrations had to be able to maintain its integrity by having an ‘‘appropriately specified and approved system’’, such as a collar or sealant.

"That was the issue that was identified.

"There were a number of those that were not correctly installed at the original time of construction and, subsequently, post-construction."

Deficiencies were documented and reported to the client.

Mrs Stokes said Logic FM "quite rightly" pointed out the fire wall issue to the council.

She said the issues had since been addressed, with physical work completed.

Mr Pont said he was "not sure" why the council and the company parted ways.

He also said council property management staff had not completed regular inspections required at the mall, which the company reported monthly to the council.Those inspections were to ensure there were not problems like furniture or boxes in fire escape paths.Mrs Stokes responded there were changes in the way inspections were done after Logic FM took over.

"When that happened, there was a divvy-up between Logic and the council.‘‘During that transfer, things could have gone a bit better, but they’ve all been addressed."

He said it was safe for the warrant of fitness process to be done in-house.

"There are many situations where the DCC has to apply to itself in its regulatory capacity, for example for building and resource consents."

The LGOIMA response also said there was no building warrant of fitness in place for the Dunedin Town Hall complex, which includes the Municipal Chambers, Dunedin Centre and the Metro Theatre.

The complex did, however, have a Certificate of Public Use  Mr Taylor said there was no code of compliance because there were "some building elements requiring attention relating to fire engineering".

The town hall’s lack of a warrant of fitness was due to work not done by contractors during redevelopment.

Asked if it was a bad look for the council for the issue to take almost four years, she said minor things could affect a pass or fail in terms of a warrant.

"Things do take time, and things have to be prioritised."

The buildings were "perfectly safe", and the issue was not another contract management problem.

Instead, staff had received new advice and that had "been a bit of a challenge to work through".

The buildings had been insured through the whole process.

I think we need to acknowledge the political clout of Elizabeth Kerr, by way of networks connections and contacts, and the persistence of research and confrontation. I would be inclined to call the blogsite an advocacy collective, but redact if not so. I also think the blogger is uncannily prescient, seeming, I say Seeming, to be aware of any unreliable commenter's communications with City Hall, soon after they have taken place. Purgatory? I should coco. It's like the Walsingham years.