'Wonderful experiences' in a life of compassion 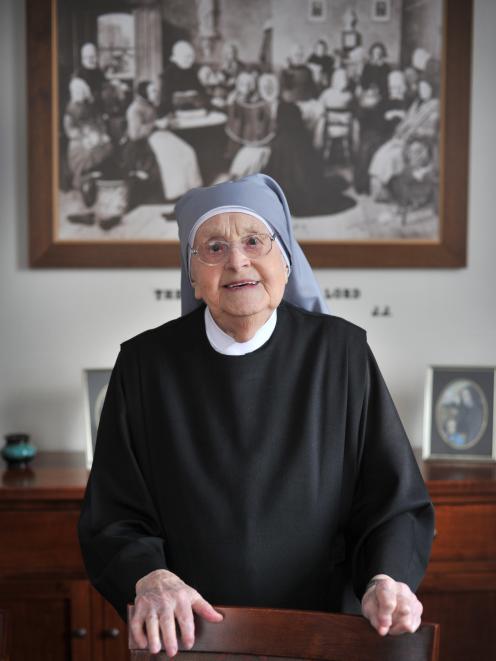 Sister Marie Fitzpatrick (104) reflects on 85 years with Little Sisters of the Poor at its Brockville facility. PHOTO: CHRISTINE O'CONNOR
At 104, a Dunedin nun has only recently shown signs of slowing after a life in which she was imprisoned by Nazis and cared for the elderly in war-torn Shanghai. Sister Marie Fitzpatrick guides reporter Jono Edwards through the Little Sisters of the Poor’s Brockville aged-care facility.

Sister Marie shuffles through the halls of Sacred Heart Home and Hospital, greeted by every worker.

She sees a man in a wheelchair.

Sr Marie has devoted 85 years of her life to the Little Sisters of the Poor order, which in Dunedin helps ``the aged suffering from financial need, loneliness or other difficulties''.

She owns nearly nothing, not even the mover she uses to walk.

``Mother gave me this, and she could take it away. I have nothing, but I don't want for anything.''

Until the last few years she still helped with meals, cutting up food and making sure residents had everything they needed.

She goes to the chapel three times a day, but says she cannot do much else.

Last week she ended an eight-day ``retreat'' in which she prayed, went to chapel, and did not talk to others.

She had a good life, she says.

``I've had wonderful experiences and wonderful protection from God. I couldn't have managed by myself.''

It has not been without frightening times.

In 1940 she was sent to occupied France with the order, but imprisoned there by Germans for weeks after being declared a spy.

She describes the experience as ``horrible'', but says she kept faith.

``I couldn't have done it otherwise.

``They took us into prison, because they thought we were helping the British, but we weren't.''

One day she was called into the office, and the next morning liberated without explanation.

``I think they [the other nuns] thought they'd taken me out to kill me, but I was all right.''

In 1936 she worked at a rest-home in Shanghai when Japanese war planes were dropping bombs on the city.

Despite the turmoil she describes it as a ``wonderful place''.

She expresses empathy to everyone she sees.

One of her fellow sisters is now being cared for in the facility.

After a quick chat, Sr Marie gives her an encouraging touch on the shoulder before leaving the room.

Sr Marie was born Anne Fitzpatrick in Arrowtown, but left home at 1933.

She was drawn to the order after witnessing her aunt's work as a nun in Dunedin.

``I was so fascinated with the elderly people and the reception we got there.''

Her life has garnered media attention in the past.

She jokes she hopes her picture is put on the newspaper's back page ``upside down''.

Spending so much time with the aged and ill, she sympathises with those whose minds have deteriorated.

``People who are not able to do things or are doing a lot of silly things, such as putting the kettle on and forgetting about it.