Some say it is an artwork depicting unity and is worth thousands of dollars.

The Mosgiel joiner has created a wooden sculpture that looks like three chain links bound together.

It is made out of about 900 individual pieces of kwila hardwood and macrocarpa, and it took about 20 hours to create.

Despite its mesmerising appearance, Mr Aburn said there was no artistic meaning behind it. 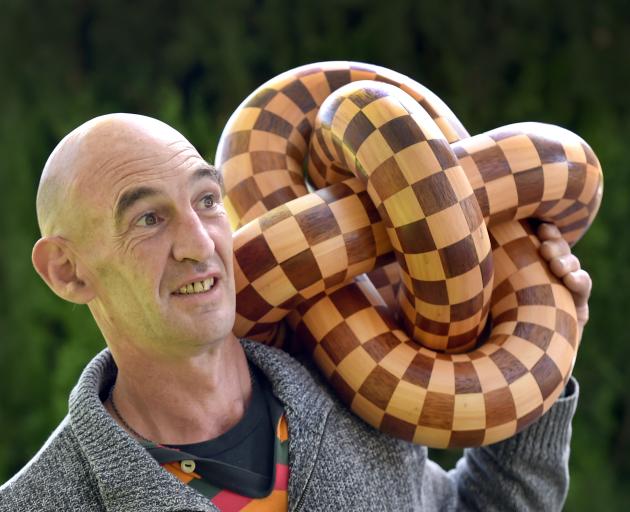 Mosgiel joiner Barrie Aburn has given his national award-winning sculpture to his alma mater, Kaikorai Valley College. Photo: Peter McIntosh
‘‘Others think I’m an artist and this is a sculpture. They see something in it — like unity.

‘‘Different people are saying it’s worth a lot of money. I say it’s just firewood, mate.’’

After seeing a photo of a similar sculpture, he thought it would be a good challenge to see if he could recreate it out of wood.

The challenge also doubled as a form of stress relief, he said.

‘‘About two hours before I finished it, it was going to go in the fire because I knew I could build it. There was no challenge left in it.’’

Instead of burning it, he completed it, entered it in the 2020 Treeworkx New Zealand Competition earlier this year for a bit of fun, and unexpectedly won.

Since then, Mr Aburn has decided to give it to his old school, Kaikorai Valley College, to say thanks for inspiring him to get into the woodwork profession.

‘‘So I gave it to the school because the woodwork teacher there [Aleni Viggo] got me into woodwork when I was 12.’’

Mr Viggo is still the technology teacher at the school and was impressed with Mr Aburn’s work.

So much so, the school now has it prominently displayed in the school foyer.

Mr Aburn said the response from his alma mater had inspired him to consider his creations as artworks, rather than just firewood, and he was now working on a bowl with more than 3000 individual pieces of timber in it.

Maybe it would be good enough for someone to buy, he hoped.