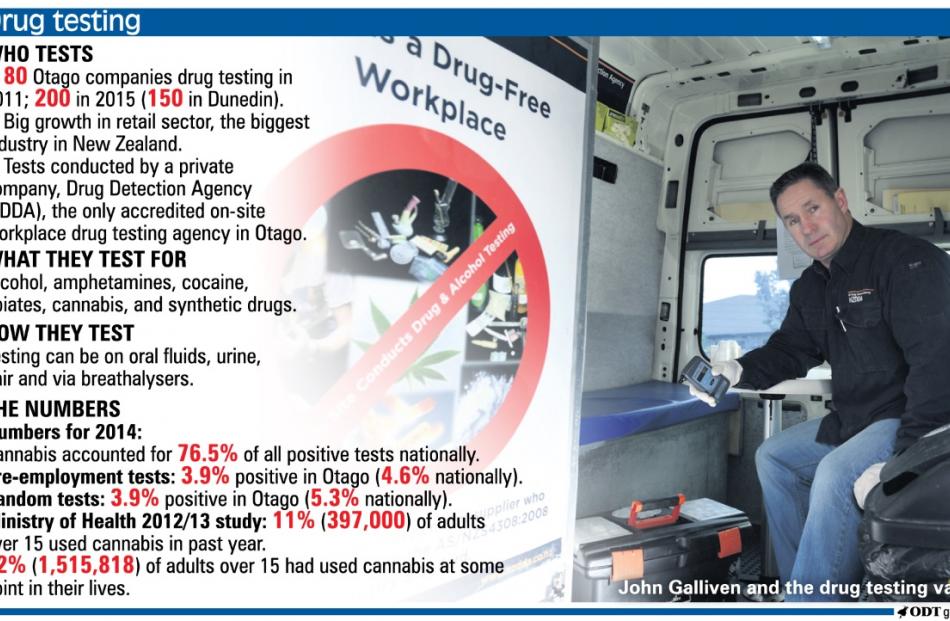 The number of Otago companies drug testing their employees has more than doubled in the past four years. But at what cost? Carla Green reports.

Tim Gordon* is happy to admit it: he smokes marijuana sometimes.

Mr Gordon is a plumber. He is in his late 40s. He lives in Dunedin.

And until about six months ago, his marijuana-smoking and his plumbing work had nothing to do with each other.

He knows marijuana is illegal, but it never posed a problem, he says.

He never smoked on the job, never went to work stoned.

Then his employer implemented a drug and alcohol testing policy.

And not long after, he had a near miss while driving a work vehicle.

His employer's drug and alcohol policy allowed for a couple of different kinds of testing, including random testing - and testing after an accident or a near miss.

Mr Gordon told his boss about the near miss.

That is when things started to unravel, because two days prior, Mr Gordon had smoked marijuana.

The active chemical in marijuana, tetrahydrocannabinol (THC), has a metabolite that is fat soluble.

And after cannabis use, the metabolite ‘‘slowly leeches out of the fat and leeches into the urine''.

Depending on the person, that metabolite can remain in the urine for anywhere from a couple of days to a couple of weeks, he says.

And it is that metabolite that drug tests usually test for, which means it is incredibly difficult to use drug testing to figure out whether someone is impaired from marijuana consumption.

‘‘[A positive test] indicates recent use,'' Dr Schep says. ‘‘The higher the concentration, the more recent the use.'

'But determining impairment is a thorny issue, he says. ‘‘You can't say definitively.''

So when Mr Gordon had his near miss, he knew he was not high, but he also knew he would test positive for THC.

And that is exactly what happened.

Mr Gordon got a non-negative result, which essentially means the test found low levels of THC in his urine.

He is now on a 12-month probationary period.

If he is drug tested at any point during that time and gets a conclusive non-negative result, he will lose his job.

‘‘I believe health and safety is important - I don't want to work with anyone who's stoned or drunk,'' he says.

‘‘But ... [these drug tests] aren't about impairment. And that's the whole problem.''

What he does in his own time is his business, Mr Gordon says - even if it is smoking marijuana.

Risk mitigation
Kirk Hardy does not see it that way.

He is a former New Zealand Police drug squad detective.

Before he left the police force, he says, he saw many ugly things.

‘‘You see people possibly at their worst, or their lowest. They've lost their job, gone to dealing, doing a lot of bad things to get by. It has a drastic effect, not just on them personally, but on their immediate family.''

And once he came across drug addicts in police work, he says, it was already too late.

‘‘The horse has already bolted, so to speak.''

It catches people before they get to the point where he encountered them as a police officer.

Mr Hardy knows full well drug testing for cannabis cannot establish whether a person was high at the time of testing.

And companies know that too, he says.

Mr Hardy says employees who work in safety-sensitive industries have no excuse for using drugs.

‘‘It's stupid, because they're putting themselves and others at risk. Everyone should know that drugs and alcohol, if you're doing a [safety-sensitive] job, do not mix. If something goes wrong, it goes wrong big time.''

And for non-safety-sensitive industries, Mr Hardy says, it is the employer's right to know if their employees - or potential employees - are doing drugs, whether it is at work or not.

‘‘Employers want good candidates. They want candidates they can trust.''

A worker's private life
But many opponents of drug testing say employers should not have that information in the first place.

‘‘Employers are, for whatever reason, either thinking they have to [drug test], that they've got some obligation around public safety, which might not actually be true, ... or for other reasons thinking this might be a way they can bring an element of control into the workplace under the guise of testing.''

Drug testing is part of a broader shift towards employers clawing their way into employees' private lives, Ms Cormack says.

‘‘I would utterly reject that an employer has some right to know that you might be using an illegal drug,'' she says.

‘‘What a worker does outside of their working hours is their own private life.''

Dave Kearns is inclined to agree.

The KiwiRail locomotive driver was a Rail and Maritime Transport Union delegate for four years, from 2008 to 2012.

He is now a union member, but not a delegate.

During that time, he saw ‘‘four or five'' people - about one a year - fired over failed drug tests.

Like Mr Gordon, Mr Kearns says being intoxicated at work is not OK.

And he knows at least one of the workers who were fired did have a problem with addiction.

But as far as he knows, the others were recreational users with no issues to speak of.

And it would have continued that way if not for drug testing, he says.

‘‘There is the opportunity for people if they've got a substance problem [to get help], but there's also people who, in my opinion, don't have a problem any more than a person who goes to a pub on a Friday,'' he says.

‘‘The difference being, that that person is clear on Monday if they do an alcohol-breath test, but may not be clear of cannabis residue if they do a urine test, but they're not impaired anymore.''

He knows about that stigma all too well.

It was because of the stigma around marijuana that he switched departments at the University of Otago halfway through his PhD on cannabis use.

‘‘The [anthropology] department got a bit anxious about it, for no reason other than all those stereotypical reasonings ... so I transferred to the department of psychological medicine,'' he says.

‘‘I felt the academic staff in the med school were much more open to the kind of study I was doing. They understand that drug-taking is something human beings have always done, in one way, shape, or form.''

*Tim Gordon is not his real name. He wanted to use his own name for this article, but was forced to use a pseudonym for legal reasons.