The children had the chance to meet Dunedin children’s writer-illustrators Kathryn van Beek and Robyn Belton, as part of a free workshop tour offered by Dunedin Unesco City of Literature.

The pupils were treated to readings and practised writing stories and creating their own illustrations.

For Belton, it was a particularly special visit to the school in Heyward Point.

While she was working on Herbert the Brave Sea Dog, which was published in 2008, she was invited to the school by its then teacher Lyn Allen, to help the children with their process writing.

"I had been working on Herbert the Brave Sea Dog for years and years but it was not coming completely right.

"I needed the final inspiration to make it into a picture book, and a wonderful thing happened."

Together, they were able to brainstorm the whole story and it "suddenly came alive". 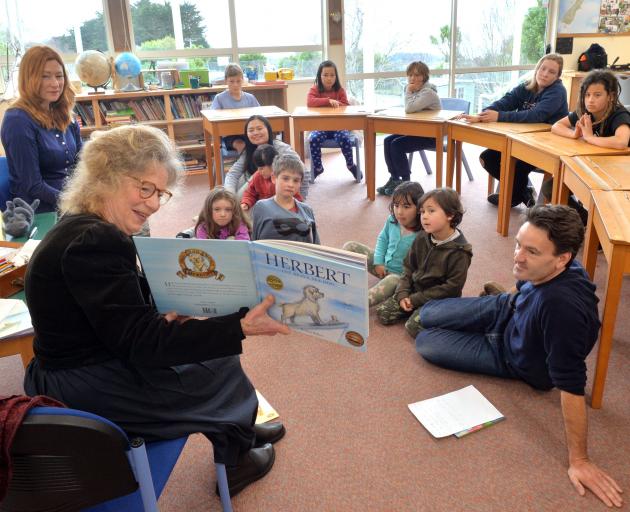 Children’s writer-illustrator Robyn Belton reads her book Herbert the Brave Sea Dog to Purakaunui School pupils, following a reading by fellow children’s writer-illustrator Kathryn van Beek (top left). PHOTO: LINDA ROBERTSON
Belton said she would never forget the children’s response and gave the school a special mention at the back of the book, which she also read to the pupils during the workshop.

Van Beek said she felt lucky to visit the school.

"I love getting to meet [the children] ... They are just filled with amazing ideas.

“The kids come up with the most delightful story ideas, and something fun and surprising happens during every visit."

The pupils received a "world exclusive" reading of her new book, Bruce Goes Outside, and van Beek also gave a copy to the school.

After the reading, the pupils wrote their own book with the author.

It told the story of a lion named Diego who wanted to see the sea, but had to travel through a dangerous jungle and fight off a "gang of crabs" to get there.

City of Literature director Nicky Page said the workshops aimed to inspire and engage children in reading, writing and illustrating.

“We know that enjoyment of reading at a young age is associated with improved life outcomes, so as a City of Literature we want to support a love of these things."