A young Dunedin family has been left with nowhere to go after being told to leave their flood-damaged property. 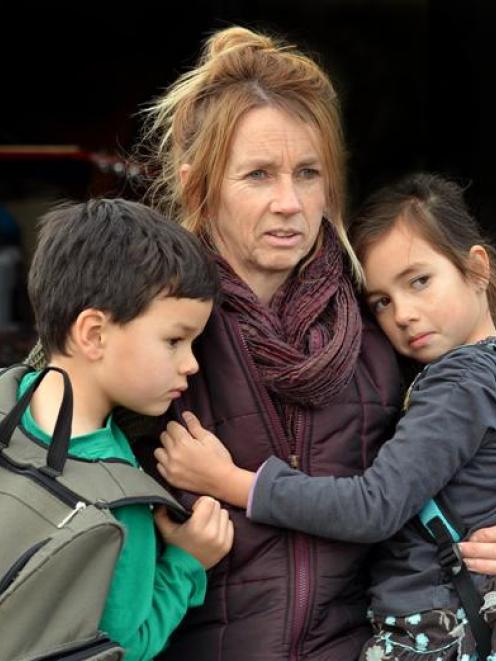 Rea Stout and twins Awa (left) and Tiana have been told their Hargest Cres property is uninhabitable. Photo by Stephen Jaquiery.
Rea Stout and her 7-year-old twins were advised by maintenance company Enviro Clean on Wednesday their house was uninhabitable because of contamination following last week's flood.

Their Hargest Cres property was awash following the deluge and the kitchen, bathroom, laundry and garden were damaged.

When asked what the family's plan was following the news they had to leave, Ms Stout replied, ''Finding somewhere to live - ASAP''.

The family's house insurance covered repair costs but not alternative accommodation, because it was under the name of Ms Stout's father, who owns the house, Ms Stout said.

The family were told repairs could take two to three months to complete.

In the meantime, Ms Stout was assessing the damage.

''I'm trying to be positive but I'm feeling a bit cynical about the whole thing.''

Staff at a Civil Defence welfare centre set up in South Dunedin were trying to find a home for the family.

She had called three real estate agents to see if any temporary rentals were available on a periodic or non-fixed lease, but was unsuccessful.

Ms Stout said she was aware of a mayoral fund set up to assist people in returning to dry housing following the flood.

She had been given a form to fill out but had not completed it yet as she was deciding what to apply for and was told there was a long waiting list of applications to be looked at.

When told she had to leave, Ms Stout said her ''whole gut was churning''.

Although any accommodation would do, staying close to St Clair School, which her children attended, was crucial, Ms Stout said.

Her partner, Leslie, worked away from home, and Ms Stout was studying social services full-time at Otago Polytechnic.

More than 200 Dunedin City Council staff and volunteers visited flood-affected homes in South Dunedin on Wednesday and a large number were out in force again yesterday.

''What we don't want to find is people sitting in their houses and nobody's contacted them because they don't have access to internet or social media,'' DCC customer and commercial services team leader Nick Wells said.

But Ms Stout said, for affected families, that help had arrived a week too late.

''There was no communication from the council. We didn't know what to do,'' she said.

''They needed to come around here last week.''

When asked about southern Dunedin's capacity to cope with a flood, Ms Stout said the area was particularly vulnerable.

''I run along the beach a lot and see the recessing happening. I was there the day before the flood and saw the damage that's happening around that [walking] track.

''I know we're living on reclaimed land and I know it won't be too long before [the sea] takes it back.''