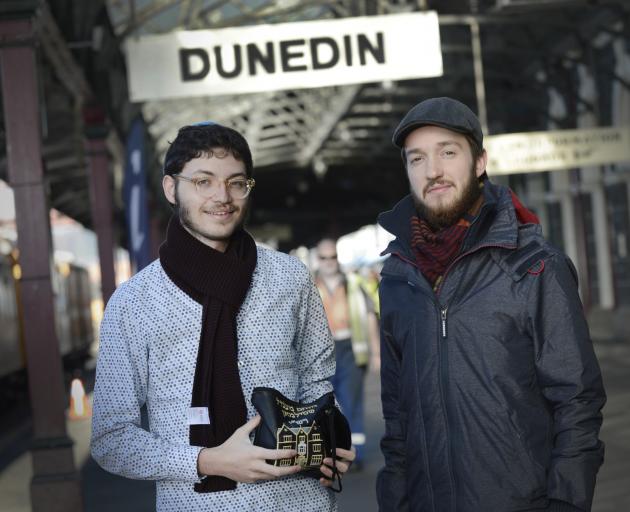 Rabbi Menachem Spielman (21), of Australia, and Rabbi Sruly Myhill (20), of New York, were in Dunedin yesterday as part of a two and a-half week visit.

Both are members of the Chabad sect of Judaism and part of their beliefs involves connecting with Jews all around the world and bringing light to the world.

For the past year, the two young rabbis, both Ashkenazi (European) Jews, have been in Singapore with a community of Sephardi (Middle Eastern) Jews. While there were many different sects of Judaism, each with different customs, all were eventually the same and believed in the same religion, Rabbi Spielman said.

As members of the Chabad sect, their goal was "to positively influence the world around us in every way possible".

"One major way we do this is by searching for `far-flung' Jews wherever we travel, providing them with a connection to their roots and religion," Rabbi Spielman said.

He is carrying a shofar (ram's horn), which is traditionally blown before the Jewish new year (around September 9-10).

"It's very difficult for isolated people to maintain their Jewish traditions," and he wanted as many Jewish people as possible to hear the shofar in New Zealand, Rabbi Spielman said.

The rabbis follow the teachings of Menachem Mendel Schneerson, known as the Lubavitcher Rebbe or the Rebbe.

"Our beliefs are based on his teaching to `do acts of goodness and kindness to bring the redemption closer'," Rabbi Spielman said.

Both were brought up in the tradition of outreach work.

Rabbi Myhill said he was working from the age of 12, talking to people on the streets of New York "making a connection", so finding and talking to Jews in remote South Island towns and cities followed naturally from that.

From Dunedin, the two are travelling through North Otago, the West Coast and across to Christchurch before heading to Hanmer Springs, Picton and Nelson.

When they leave New Zealand, Rabbi Spielman will return to Australia and then go on to New York. Rabbi Myhill will return to his parents' home in Hartford, Connecticut.

If anybody wants to meet up with us on our trip, please send an email to nzjews@gmail.com . Below is our schedule: