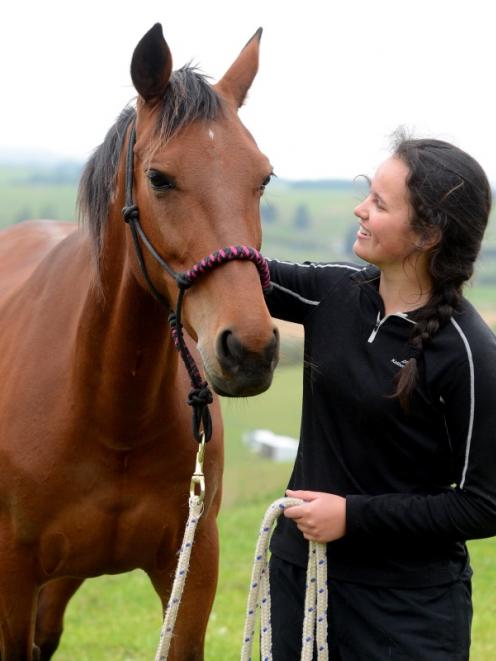 Lexie Elliott with her horse Jay in the paddock at home in Palmerston. Photo by Linda Robertson.
Lexie Elliott has plenty of contrast in her sporting world.

First, she has the leaping and running of netball.

Much the same for volleyball.

Then throw in a bit of thrust and speed for touch.

But to calm it all down she jumps on her horse, Jay, to train for dressage, one of the most elegant and graceful of sports.

Lexie (15), a year 10 pupil at East Otago High School, does not have a favourite sport but most afternoons after school will either be on a court somewhere or in a paddock working with her standardbred horse, Jay.

She started playing netball aged 5 when she lived in Cromwell and has continued to play ever since.

Playing goal attack, she made the East Otago High School senior A team when she started at the school last year.

This year, she helped the side

win the premier two grade in the Dunedin competition.

Her next target is making the Dunedin under-17 side in the next couple of years.

Lexie's summer sports are touch and volleyball, while dressage is something she does all year round.

She took up the sport a couple of years ago because friends at East Otago High School were riding horses and she followed suit.

Coached by Sharon Chamberlain, she works her horse most afternoons when she does not have to attend another practice on and rides in the show circuit when time allows.

She also works with other horses when possible.

Lexie has won ribbons on the show circuit and is hoping for more in the coming summer.