Pupil finds a new string to his bow 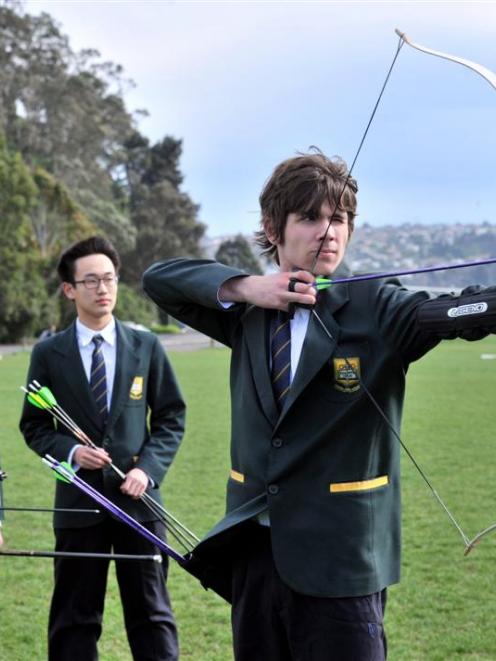 Bayfield High School pupil Andrew Robertson (18) posted the highest tally in the national secondary schools competition for term 2. Also pictured are Daniel Pearce (17, left) and Sean Ma (17), who teamed up with Felix Wagner and Giam Cole to win the teams event in limited recurve. Photo by Linda Robertson.
When archer Andrew Robertson lines up a target, the sight he uses is a pin stuck through some foam, which is taped to the bow he borrowed from his teacher.

In the limited recurve category, in which Andrew competes, archers are not allowed to use sophisticated sights. Everybody uses a similar makeshift sight but that does not diminish his achievement.

The 18-year-old year 13 Bayfield High School pupil, who only took up the sport this year, posted the highest tally in the national secondary schools competition for term 2. Giam Cole, Sean Ma, Felix Wagner and Daniel Pearce combined to win the team event for the school as well.

Andrew (18) said he was introduced to the sport through teacher Catharine Kan. She sent out a notice asking if anyone was interested in an introductory archery course.

That was in March. Since then the school's archery programme has gone from fledgling to powerhouse and Andrew is the star student.

He scored 172 out of a possible 180, including 11 10s and Xs. An X is essentially the middle of the middle and is used in archery as a tiebreaker. If two opponents have the same score, the person who scored the most Xs wins.

Andrew has been inspired by his rapid success and hopes to defend his title this term.

''I hope to win it again this term and we'll see how that goes,'' he said.

He practises once a week at the Dunedin Archery Club at Chingford Park.

His scores are recorded throughout the term and the highest score is submitted to New Zealand Archery.