At number three, he has the urgent need to respond to environmental challenges. New Zealand is primarily an agricultural exporter dependent on a stable environment.

But, Prof Patman asks, is the country aware of how pressing the issues of extreme weather events, declining fresh water quality and rising sea levels is becoming?

Second on the list of threats facing New Zealand, is the diplomatic squeeze being put on the nation by the two competing superpowers, the United States and China.

On issues of human rights and the rule of law, New Zealand does not share the world view of either the Trump administration or the Xi Jinping administration.

But we need to find a way of maintaining relations with both without becoming a doormat to either country, he says. 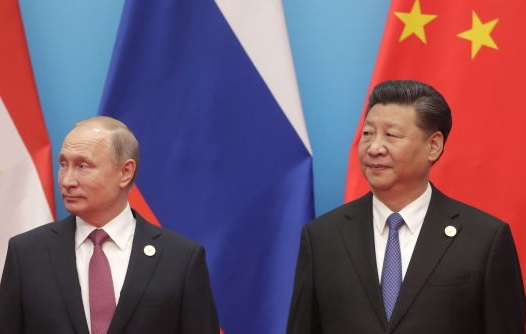 Russia's President Vladimir Putin and the President of the People's Republic of China, Xi Jinping. Photo: Getty Images
Prof Patman says the greatest global threat in 2019, is the crumbling of the international rules based system.

This threat is coming from several quarters, including Russia, China, the US and the United Kingdom. The rules were in place to defend the weak, but they are being weakened and, in some cases, trampled.

He urges New Zealand, and like-minded liberal democracies, to speak out - not just to maintain the status quo, but to tackle global problems, especially inequality.

A recent report states that 28 of the world's richest billionaires have more wealth than half the global population.

We need to find ways to "make the international economy work better for more people''.

He warns the risk, if that doesn't happen, is that people will lose faith in democracy, allowing authoritarian regimes to increase.

The UK is a threat to the "international rules based system". How? The European Union is gradually moving towards a federal governance structure, it is a political project and people in a democracy have a right to reject that.

Clearly, since this January post, we now know that the priority is Homeland Security, with monitoring of the Right.