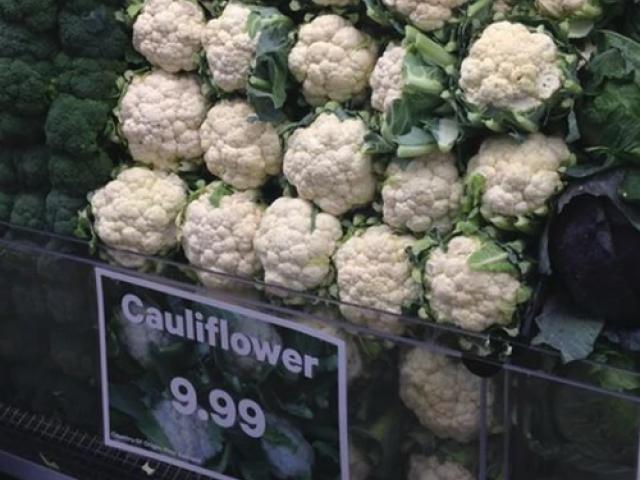 Cauliflower was photographed priced at $9.99 yesterday at New World, Wellington. Photo supplied via NZ Herald
Hankering for cauliflower in your meat and two vege? Well be prepared to shell out for it, as some are $10 a head.

Cauliflower was photographed priced at $9.99 yesterday at New World, Wellington.

A Herald photographer this morning found a cauliflower for $9 at Farro Fresh and an out of stock sign for the vegetable at a Ponsonby Countdown.

“It’s been raining a lot. Cauliflower don’t like the rain.

“Same issues with broccoli and the leafy veg - all the things that grow close to the ground and don’t like the rain that much.

“We hope the weather settles down and things should start to come right.”

Laird said prices should come back down over the next fortnight. In the meantime, if households were struggling to afford fresh vegetables she recommended going for frozen.

“You can get really good value frozen cauliflower and broccoli at the moment. There are quite often deals but it depends on what supermarkets and brands.”

Growers of green vegetables in the North Island have been battling 18 months of extremely adverse weather conditions, impacting produce growth and driving up prices - and also costing jobs.

Horowhenua is a horticultural hub, known as the food basket of the lower North Island; it has been severely affected by the unrelenting and extreme weather conditions.

He said they were running out of spinach and as a result, 20 women would be without work for up to 14 days.

“Some of those ladies will be grateful for the holiday, but a lot of them have rent to pay and families to feed,” he said.

“People tend to forget about the social side.”

Clarke said 85 per cent of his lettuce has bolted and gone to seed due to the heat and 50 per cent of the zucchinis were destroyed during Cyclone Gita.

In a market driven by supply and demand, prices have more than tripled for some of the most affected vegetables.

“We are purely price takers, what the wholesale market pays is what we get and they are paying more for what we don’t have much of.”