1080 madness: Threats against Doc staff on the rise 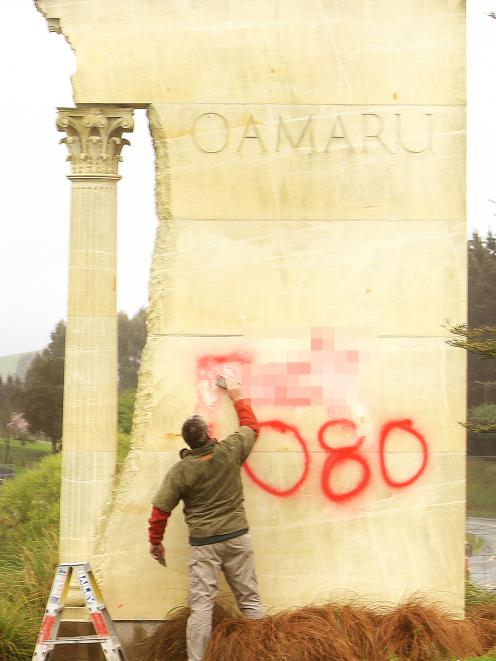 The Oamaru welcome sign is cleaned after being vandalised earlier this year. Photo: Hamish MacLean
A Department of Conservation ranger has told of sleeping with a gun under his bed, amid fears for his family over death threats from anti-1080 activists.

Figures show such threats against staff have risen dramatically over the past few months – most of it centred around Doc's use of 1080 poison to rid conservation land of the rats, stoats and possums decimating our native bird species.

Some of the more serious abuse has been detailed in new notes released to the Herald under the Official Information Act.

The ranger, who spoke on the condition of anonymity, said the most frightening incident included a man parked outside his home, waiting.

"It has been hard not to start imagining the worst. For two weeks I slept with a gun under my bed, I didn't want to have to use it," he said.

"These pricks are out there sleeping like babies while me and my family jump every time we hear the dog bark or a car drive past."

Doc responded to the threats by installing a security camera on his property and for two weeks he had security guards outside his house.

Doc has logged hundreds of incidents this year, ranging from social media death threats to a worker being approached and asked to eat 1080, while also receiving threats against their family.

Last month, photos and details about a South Island Doc worker were posted online, along with comments that included "filling him with lead" and "we need some good snipers in NZ".

A few days later, a letter delivered to the New Plymouth Doc office, containing a blue substance that was leaking from it, was forwarded to the police to deal with.

In October, the host of a radio station even encouraged the kidnapping of a Doc employee: the matter was referred to the Broadcasting Standards Authority.

One staff member who was interviewed on TV was later the subject of attempts to identify her in her own community.

There were other threats to interfere with or shoot down aircraft dropping 1080, and cases of vehicles' tyres being slashed and wheel nuts loosened.

In one case, two Doc vehicles encountered another vehicle painted with anti-1080 slogans.

The protester overtook the rear vehicle and slowed in front, causing the driver to brake, before over-taking the front vehicle and taking off.

Some cases could not be detailed by Doc as they were now before the courts.

"I just think [the anti-1080 fervour] is all so unnecessary, if people just took the time to be informed," the ranger said.

"This stuff is just coming from some of the hardcore protesters, there is a lot of misinformation out there and there is almost no way of getting through to them."

The ranger blamed social media for fuelling the hostility.

"There is almost this religious fervour, not backed by the facts. It is disappointing for me, out there on the frontline and having to deal with the fall-out," he said.

The ranger said, conversely to what these protesters claimed, they worked to protect and save New Zealand's native flora and fauna.

"We are just going about doing our job, and the job we do is for every New Zealander. We are into saving the birds, not killing them."

"1080 is the best tool for the job in large, rugged or remote areas and if we don't use it forests will continue to be devastated by pests and we could lose our precious birds such as kiwi, mohua, and kokako," Sanson said.

"Where we are using 1080 to target predators, our native species have started to recover.

"Doc staff need to be able to get on with their job of protecting conservation areas without fear of being harmed or harassed."

"It is hugely disappointing that some anti-1080 activists are so opposed to protecting our forests and native species like kiwi, kaka and mohua that they think it is okay to abuse and try to intimidate Doc staff," she said.

Dave Hansford, author of the book Protecting Paradise: 1080 and the Fight to Save New Zealand's Wildlife, had been monitoring anti-1080 pages on Facebook and suspected much of the anger actually had little to do with the poison.

"Instead, the hate and vitriol is very often directed at Government, and at authority in general," he said.

"I don't think it's a coincidence that the very regions and communities where anti-1080 sentiment burns hottest happen to be those that have been affected most badly by three decades of job losses, eroded worker protections, evaporating welfare and social services, and the loss of Government jobs and infrastructure."

"Part of the appeal of anti-1080 sentiment is the collective reinforcement of chanting those myths with other true believers — the dreaded Facebook bubble — so it shouldn't surprise us that the hyperbole keeps on mounting exponentially," he said.

"It's like any other stimulant, you need ever-stronger stuff to keep getting the buzz, and now that 1080 has become an article of faith in the conspiracy community, it's easy to see how social media has given this thing wings."

A social media post threatened to drop 1080 in public places, including schools, walkways and swimming pools within the Manawatu region. A threatening phone message was left with a Lower North Island visitor centre with abuse and multiple threats to kill. Numerous threats made in person to make a staff member eat 1080, various threats to harm including the individual's family.

A social media post called for support to take action to subject helicopter contractors to more media exposure for their part in 1080 operations, with responses including comments to shoot the helicopters.

A message received through private message on Doc's Facebook page read: "Hi hope your enjoying your day, I'd jus [sic] like to say, if my daughter is effect [sic] by 1080 poison due to it being tossed into our water supply, I myself will find each of you Doc muppets and slaughter the skin off your faces and have you living inches before death". A radio station host encouraged the kidnapping of a Doc employee. The matter was referred to Broadcasting Standards Authority. Messages posted to Doc's Facebook page read: "U WORK FOR Doc WATCH YOUR F**N ASS 1080 SCUMBAGS".

A photo and details about a Doc staff member was put online, and associated comments included "filling him with lead" "... needs nuts kicked really f**n hard", and "we need some good snipers in NZ". A letter was delivered to the New Plymouth Doc office. A blue substance seemed to be leaking out of the envelope under clear scotch tape. The letter was delivered to police.

Why did the reporter not interview anyone who is against 1080? Most people who oppose it are just normal, everyday New Zealanders, often who have lost pets, livestock, critical water or food supplies, recreation opportunities, their livelihood, and even their health to this toxin. Many are scientists - ecologists, chemists, zoologists - farmers, conservationists, trampers, medical experts, and highly educated, perfectly reasonable people, many of whom have witnessed the results of 1080 first hand. The anti-1080 movement is a peaceful, lawful one, which abhors and condemns threats, damage, and unlawful action. Every issue attracts the occasional idiot, and those are not the people to focus on. There is a large body of scientific research, and even larger gaps in the research, that raises concerns about our use of 1080 but anyone who questions it is immediately labelled as "misinformed", or a violent member of the lunatic fringe. The media have made sure of that. Can we please have a balanced view of this issue presented? The reason certain communities are a " hotbed" of opposition is because they are ones in the firing line, who have to suffer the consequences first hand.

I'm all for not using 1080
But....
When will one of thesecareer protesters offer an alternative instead of just complaining?
Couldn't the money they waste be better put to researching a safer alternative?
Or are they against that because they'd actually have to go find a real job after the new discovery?