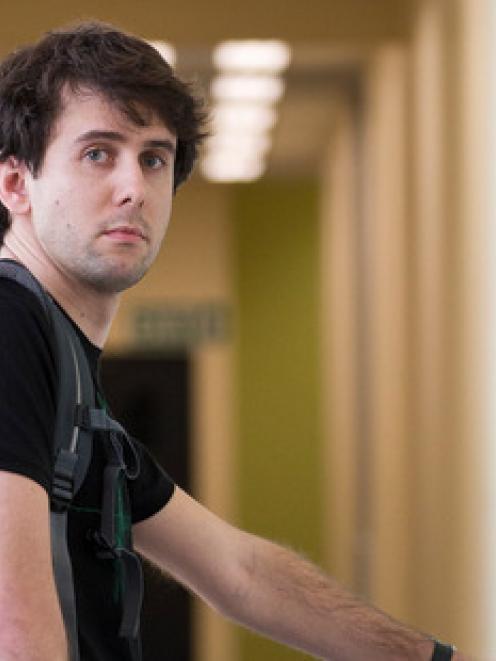 Samuel Blackman arrived from London on Thursday morning only to have all of his personal electronic items seized by New Zealand Customs. Photo / Greg Bowker
A backpacker coming home from Christmas had every bit of electronic equipment stripped from him at the airport but has no idea why.

His only theory - his attendance at a talk in London about Edward Snowden's leaked documents.

"I don't have a bloody clue, "said Mr Blackman, 27, who was breaking up travelling with his journalist fiance Imogen Crispe for a month back in New Zealand for Christmas.

The only possibility of why it occurred was his attendance - and tweeting - of a London meeting on mass surveillance sparked by the Snowden revelations, he said.

Mr Blackman arrived in Auckland at 5.30am on a flight from Heathrow, travelling through San Francisco.

He declared loose-leaf tea he was carrying as he came through Customs and believed that was responsible for the extensive bag search to which he was subjected.

"He said 'we're not worried about the tea','' Mr Blackman said of the Customs' official.

The official then returned to going through the bag, pulling out electronic equipment as he did so.

Mr Blackman said when he pulled a phone out of his pocket, the official also took that, refusing permission for him to call his parents who were waiting in the arrival lounge.

He said he was also told to provide passwords for the equipment.

One of the phones had no password but required a design to be traced on the screen. The official was unconcerned and said the forensic team would defeat security to access the device, Mr Blackman claimed.

He said he asked why the items were being confiscated and the official refused to say - or to say how long the items would be kept.

In November, Mr Blackman and Ms Crispe attended a meeting at the Royal Institute of British Architects attended by Guardian editor Alan Rusbridger, MPs from across Europe, and spokespeople from groups opposing spying.

She said passengers considered "high risk" received attention at the airport. She also said Customs officials were required to have "reasonable cause" to believe an offence had been committed.

"Information or data may be used as evidence of an offence or may be a prohibited item such as objectionable images.''

TechLiberty director Thomas Beagle said the seizure of phones and laptops was a "major interference in your life"in the modern world.

He said Customs law had a pre-digital focus which, when applied to the technical age, did not take into account the amount of personal information or the frequency of use.

"What does this mean for other people? You really have to consider what you take over the border.''

Mr Beagle said his understanding of the law was that travellers did not have to surrender their passwords.

However, he said it meant it was likely the device of interest would then not be allowed into the country.