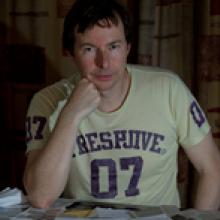 Jeff McClintock photographed his 7-year-old daughter Violet when he found her in the "naughty corner" during the Values in Action class at Red Beach School. Photo / Sarah Ivey
A couple who took their daughter out of a school class based on the Bible were dismayed to find her left alone in a classroom "naughty corner" with a book during the 35-minute lesson.

Jeff McClintock posted a photograph of his 7-year-old daughter Violet on the Secular Education Network Facebook page showing the little girl kneeling on the floor next to a rubbish bin as she read the book, at Red Beach School, Auckland.

Mr McClintock said he was told the school had an alternative programme for children who opted out of the weekly Values in Action class.

When he arrived one day to check on her he found her in the corner children are sent to for being naughty.

"Last year my daughter spent a total of 4.5 days sitting in this corner.

He said that his daughter had "promised not to be naughty again" when she returned home after one of the opt-out sessions.

Mr McClintock and his wife took a stand against the class when as a 5-year-old Violet began asking if she could "meet God".

"We went along to have a look and realised it was run by very devout Christians."

He said although the school asked parents for permission for their children to learn Values in Action, he said it was not clear until he pressed the previous principal and board of trustees who agreed it was "religious instruction".

That was more than three years after a 2008 Education Review Office report advised the board to clarify exactly what the class was.

More than 40 per cent of state schools offer Bible studies with about 2000 untrained volunteer teachers from outside the school.

The classes must not be held in school hours but schools can circumvent the law by "closing" the classroom for the duration of the studies, which usually last up to 30 minutes.

The McClintocks have complained to the Ombudsman, saying the school is not meeting requirements around education hours because of time allocated for the Bible studies classes.

Mr McClintock now takes Violet out of the classroom corner once a week for a walk while Values in Action is taught.

Red Beach School principal Julie Hepburn and board of trustees chairman Malcolm Haggerty did not return Herald messages. A spokeswoman for Values In Action said they did not want to comment.

A state school can choose whether to include religious classes as part of its curriculum.

School boards do not have to notify parents on choosing to include religious classes, but most schools discuss the issue with parents.

A parent can have their child "opt out" of classes.

It is the school board's responsibility to come up with an alternative arrangement for students who opt out.

No other religious instruction can take place at a secular school.