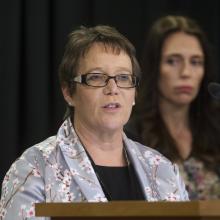 Internal Affairs Minister Tracey Martin is responsible for shepherding the bill though Parliament. Photo: NZME
People will be able to change genders on their birth certificate by way of a statutory declaration, instead of needing confirmation by a judge, under a bill reported back to Parliament.

And they will have options others than male or female – the options of "intersex" or "X (unspecified)" will also be available if Parliament adopts the recommendations of the Governance and Administration Committee on the Births, Deaths, Marriages and Relationships Registration Bill.

The move to self-identification for gender changes on birth certificates rather than needing the approval of a court and medical evidence brings it into line with passports and drivers' licences, committee chairman and National MP Brett Hudson said.

The bill is in the name of Internal Affairs Minister Tracey Martin, a New Zealand First MP. Assuming she has the support of her caucus, the changes look set to get the unanimous support of the Parliament.

Family First objects to the planned changes, saying historical documents should not be allowed to be manipulated by the state or politicians.

Director Bob McCoskrie said politicians wanted to ignore biological reality and, in the process, bring about confusion and ambiguity.

"A birth certificate is a historical record based on fact, not a political tool to further an ideology.

"By choosing you own gender in your birth certificate, the certificates will become an object of unscientific gender ideology and effectively tell medical professional that they got it wrong at the time of birth."

Mr Hudson said the original birth certificate would not be erased under the changes. The public record might change but the original details would still be kept.

"I acknowledge perspectives and views from all quarters on this matter."

But the select committee had taken some effort to assess what harm such a change would create for others and it determined to a high level of confidence that it would not place others at risk.

The committee recommends that changes in the birth certificate for a 16 or 17-year-old require the consent of their guardian and a recommendation of a health professional.

National had concerns with some elements of the bill, such as the broad definition of "health professional" which includes social workers. But Mr Hudson said his party had not wanted to stall the bill and wanted to show some trust in MPs across the House to get their concerns resolved.

Under another change, the committee has recommended that when a child's birth is registered, as required under law, that the parents be allowed to choose their status as "mother," "father" or "parent."

The bill, which was last modernised in 1995, was introduced by former Internal Affairs Minister Peter Dunne but has been taken over by his successor, Tracey Martin.