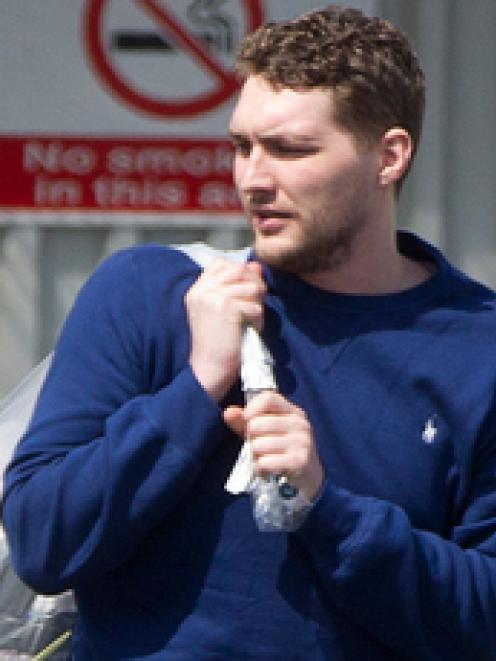 Daniel McGannan. Photo: Sarah Ivey/NZ Herald
A Briton who admitted arranging for 3kg of cocaine with a street value of almost $1 million to be delivered to his old schoolmates in Auckland has been sentenced to six and a-half years in prison.

Daniel McGannan earlier pleaded guilty in the High Court at Auckland to one charge of supplying the Class A drug.

Today he was sentenced in the same court to six and a-half years in prison. No non-parole period was set.

McGannan showed no emotion as Justice Kit Toogood sentenced him to serve the term of imprisonment in New Zealand.

The 28-year-old was arrested in London last June and extradited to New Zealand four months later.

His arrest was part of a police operation dubbed Operation Gringo.

It was launched after the cocaine was found hidden in a suitcase carried by Mexican David Negrete Nevarez, who arrived at Auckland Airport on a Lan Chile flight from Santiago in December 2011.

Nevarez was among five people arrested before McGannan was traced.

Watched by police, Kemp transferred the package containing the drug to Wellingtonian Brendan John Clarke, who agreed to find buyers for the cocaine, which was 80 per cent pure, after the original purchaser pulled out.

Nevarez, 43, had previously pleaded guilty to importing and possession of cocaine for supply and been sentenced to seven years in prison.

Gemmell and Kemp each pleaded guilty to one charge of possession for supply and were jailed for two years, six months and two years, 10 months respectively.

Clarke, a 37-year-old self-employed builder who worked as an Earthquake Commission contractor inspecting damaged Christchurch homes, pleaded guilty to possession of cocaine for supply and will spend four years and eight months in prison.

A Wanaka man he allegedly delivered the package to has pleaded not guilty and will stand trial in Christchurch later this year.

According to the police summary of facts, McGannan came under police scrutiny after sending Gemmell a text message from London that read: "It's all sorted out ... I've spoken to the people and sh**."

It is understood he knew Gemmell and Kemp from his schooldays on Auckland's North Shore.