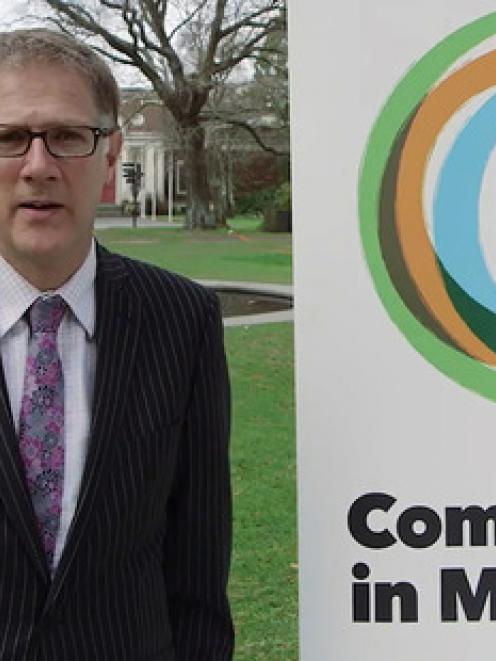 The allegations, which surfaced at the weekend, accused Mr Sutton of harassing a senior female staffer.

Sutton is alleged to have made inappropriate jokes and comments towards the woman, as well as giving her a hug.

At a press conference at Cera's central city offices today, Mr Sutton, 50, said he would resign, effective from January 31, next year.

The father-of-three walked in to the press conference hand-in-hand with wife Jo to face the waiting media.

He said he was leaving "of my own free choice", but admits his actions were hurtful.

"Hugs, jokes ... I do do those things, and I've hurt somebody with that behaviour and I'm very, very sorry about that," Mr Sutton said.

He said he had "worked my guts out" for the last three-and-a-half years and was "very upset that I have hurt people".

"But I am who I am. I have called women honey and sweetie, and that is wrong. That's a sexist thing to do, and I'm really sorry, I should not do that, and I and will stop doing that."

Sutton said it was a "hard job" and the last eight weeks had been "the straw that has broken the camel's back".

He said he was exhausted, and wanted to spend more time with his family.

"I'm not a victim. I take responsibility for my own actions," he said.

He has been seeing a psychologist and believes he will be a better person because of the incident.

Mr Sutton said he had not had time to reflect on what his next move may be.

After the press conference, Mr Sutton's wife Jo was struggling to come to terms with what has led to her husband's resignation.

"It's been pretty awful actually. It's been hideous. He's a really good man. Why his hugs and jokes have been misinterpreted? I have no idea. But he's a touchy-feely person. In Christchurch, we hug everybody and I can't understand it.

"We've had so many calls over the weekend from people saying, 'We love you Roger, we love your hugs'.

"He's a really good man - he's far nicer than I am. He's far more compassionate than I am, but he's also really silly. And that's kind of what I love about him.

"I think he kind of forgot that he was the leader of the public service and he's too informal, he's too relaxed ... but that's who he is. That's what makes him amazing, and why his staff, the Cera staff, love him."

She said she was an advocate of men and women being safe in the workplace, but added: "I just wish this could have been done in a less public, less hideous way."

"I just wish there could have processes that prevented it from being so ugly in public."

Jo supported his decision to resign.

"I want him to be with us. I've been raising my boys on my own," she said.

"I feel really sad for Christchurch people who are gutted. He's not a victim."

While the report found Mr Sutton's conduct did not always meet the standard expected of public service leaders, it did not recommend dismissal.

Although not called on to make any decision in relation to the report, the commissioner was very likely to have followed the recommendation not to dismiss Mr Sutton.

"Every state servant must be able to work in a safe environment where they are treated with professionalism and respect," he said.

The investigation report was provided to the commissioner but Mr Sutton offered his resignation and it was accepted.

Mr Rennie said police were not involved in the complaint.

The employee who raised the complaint is still with Cera.

Mr Rennie met her today to apologise for the "hurt and distress" she experienced.

"I respect Mr Sutton's decision and acknowledge that this was a very difficult call to make for someone who is so committed to the Canterbury community," Mr Rennie said.

"Mr Sutton has made an outstanding contribution to Canterbury as chief executive of Cera since 2011 and he leaves a strong legacy to his successor. His visible and engaged leadership during challenging times will be remembered well for many years.

"Greater Christchurch's recovery continues to be a major focus for the Public Service and Mr Sutton's resignation will not affect the work to make that happen or the role of Cera.

"Throughout this process, SSC has worked with Cera to ensure the complainant has been supported and will receive any ongoing support required.

"As his employer, we have also provided support to Mr Sutton."

To protect the privacy of the parties involved in this complaint and to respect undertakings of confidentiality, the investigation report and details of the exact nature of the complaint will not be released.

"I expect every government agency to have clear policies and processes to deal with complaints fairly and confidentially, and to provide appropriate support to complainants and those whose conduct is investigated," Mr Rennie said.

Mr Sutton will cease to be chief executive of Cera on January 31, the day before Cera moves from being a Public Service department to being a departmental agency hosted by the Department of the Prime Minister and Cabinet.

Arrangements for an acting chief executive and the recruitment process for a new one would be advised shortly.