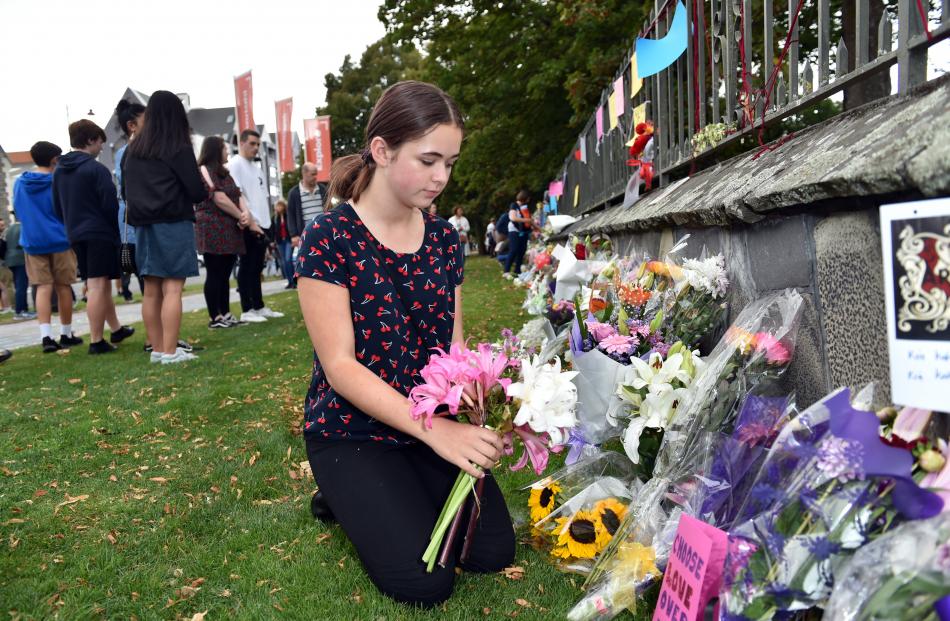 Eloise Piper lays flowers at a makeshift memorial near the Arts Centre on Saturday afternoon. 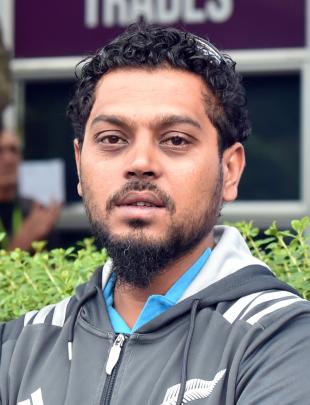 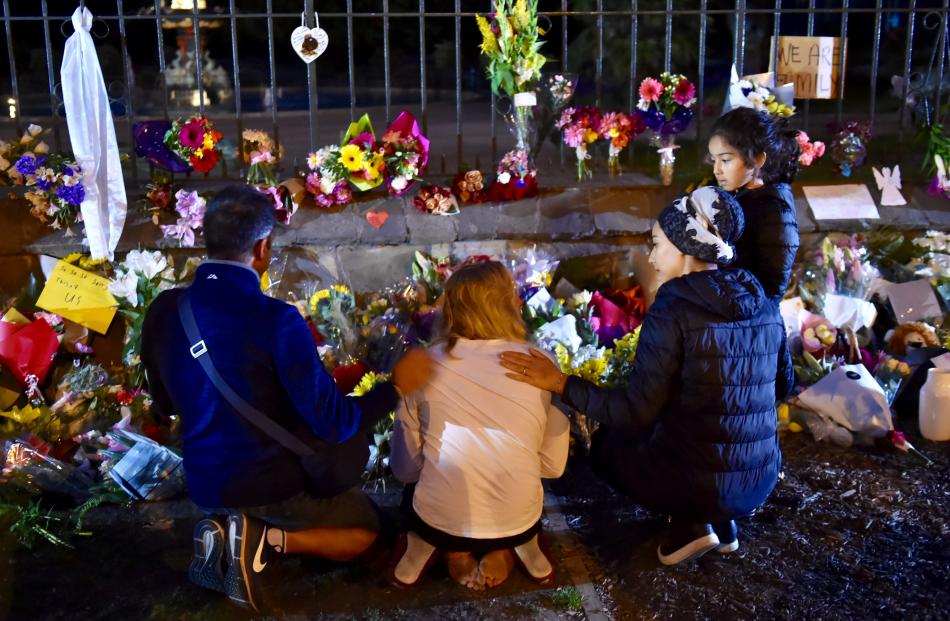 Members of the the Christchurch Islamic community (who did not wish to be named) show support and compassion to a distressed man at a large makeshift flower memorial on Saturday evening. 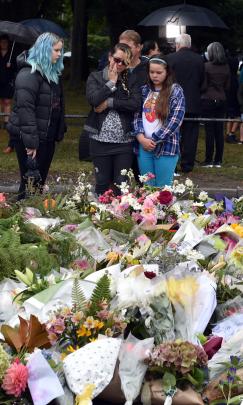 Members of the public pay their respects at a makeshift flower memorial in Deans Ave yesterday morning.

Disbelief, fear and sorrow were the overwhelming emotions in Christchurch at the weekend after a terrorist shooting at two mosques left at least 50 people dead and scores more wounded on Friday. Otago Daily Times reporter George Block and photographer Gregor Richardson talked to survivors and supporters.

Muslims in Christchurch say they have been overwhelmed by support from the wider Islamic community and city residents.

Christchurch residents have been organising halal food drives, laying flowers at cordons and paying tribute to the quiet grace and dignity of the city's Muslims in the wake of the hateful attack.

Residents gathered in uneasy silence to lay candles, flowers and messages of remembrance at a wall in Rolleston Ave in the central city, near the buildings badly damaged in the earthquakes eight years ago.

Ruby, originally from Afghanistan, stood with her husband Sayed and their 5-year-old daughter on Saturday night in the candlelight.

The couple, who lived through the earthquakes, watched as tearful residents laid their tributes, reflecting on the many people she knew who had been killed in the attacks.

Speaking to the Otago Daily Times after comforting a distressed man who had been kneeling near the wall, Ruby, who would only give her first name, said she had initially feared to leave the house the morning after the killings, but was emboldened by the level of support shown.

"When we woke up this morning, I felt like I didn't want to get out of the house anymore, because I didn't feel safe.

"But it was just knowing that there were so many other people that have gathered there just to support us.

"It makes us feel like we are really not alone.''

One of those to offer his support was Auckland man Mohammed Shamil, who travelled to the city to help his Islamic brothers and sisters bury their dead, despite not knowing anyone caught up in the tragedy.

"I don't have any friends here - it's just the humanity.

"We will be giving support to the families and also getting the graves ready, and cleaning and dressing the bodies.''

Mr Shamil said he had been inside the Al Noor Mosque in Deans Ave, where the gunman is alleged to have killed 41 people, and where police were preparing to release bodies for burial to families.

In Islam, bodies were usually buried within 24 hours, but this was not a hard and fast rule, especially in cases where the cause of death needed to be determined before burial, Mr Shamil said.

Non-Muslim residents and members of the media who have swarmed the city said they had been humbled by the grace, patience and dignity of the Islamic community in the wake of the massacre.

But Mr Shamil, originally of Fiji, said that was to be expected.

"Islam is about peace and being humble and kind.''

The 37-year-old builder arrived in the city on Saturday morning, around the same time Brenton Harrison Tarrant appeared in the Christchurch District Court charged with murder.

Tarrant smirked and made a white power gesture in the dock as he stared down the media pack.

Two of those he is believed to have killed at the Al Noor Mosque were friends of Said Rafizada, who spoke to the ODT as he comforted his young family outside the closed Rasullulah Centre in Bishopsdale, home to the United Afghan Association of Canterbury.

Mr Rafizada said he was explaining the massacre to himself and his family as akin to a horrific accident.

While his children were afraid, he was not.

"I explain this like as an accident - for example, like a drunk person coming up and making trouble.

He had experienced racism and Islamophobia during his years in the city, but that was to be expected anywhere, he said.

"I can't say there's nothing here, but it's like human nature - racism is sadly normal.''

Opposite the Rasullulah Centre is a fruit and vegetable market, where Christchurch woman Vicki-Anne Parker was loading up her car with donations, part of a halal food drive organised on social media.

Ms Parker said it was her way of repaying the help she had received after the earthquake.

"I was red-zoned during the earthquake, and this is my way of giving back.''

Across town at the cordon near the Linwood mosque later that afternoon, Christchurch man Jason Tata, wearing his red Crusaders shirt, was securing a single fern to a traffic pole.

"It's just to show these fellas that we're here for them and it won't divide us as Kiwis.''

Also showing her support, back in town at the wall of flowers in the central city, was 13-year-old Eloise Piper.

"I'm here to support my Muslim friends - one of them is really heartbroken because her family was in it.

"I'm just really scared of what will happen next.''