Cold, wet weekend on the way 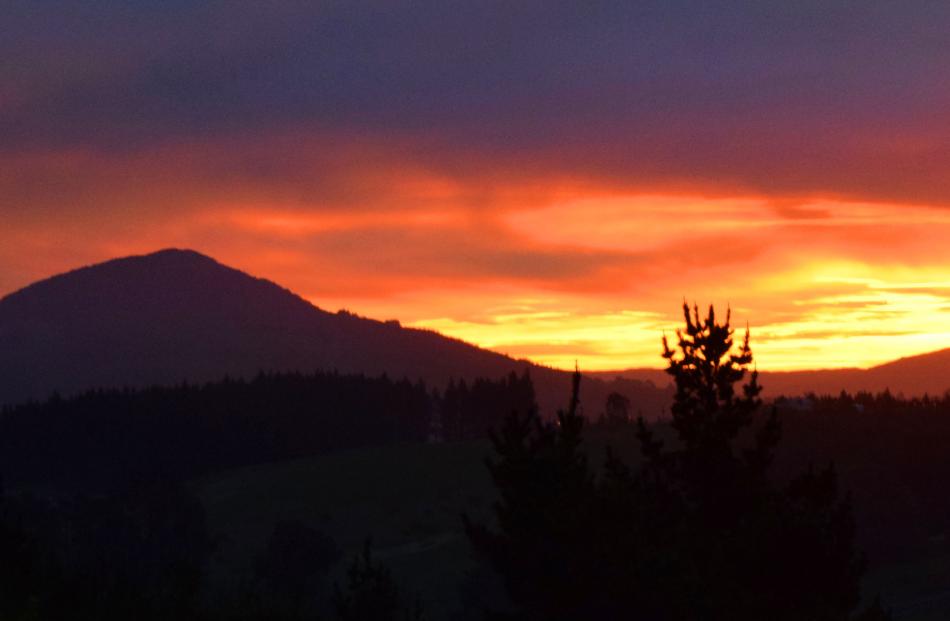 Red sky at night may be a sailor's delight, but the red sunset behind Saddle Hill tonight signals a warning of a sharp return to winter. Photo By Craig Baxter

Voters will need to wrap up warm and bring raincoats and brollies to get to the ballot box on Saturday as the weekend weather looks set to be cold and wet.

The miserable weather will likely have an effect on voter turnout, a Victoria University political science expert says.

A mixed bag of wind and rain coupled with sunny, calmer spells will characterise much of the country, WeatherWatch said, while MetService warned of gale-force winds and driving rain for the North Island and snow for the South Island.

"What we are expecting is a bit of a cold outbreak which is going to be moving through overnight Friday into Saturday."

Temperatures across the South Island would be around 8C or 9C, but would "feel much colder than that", she said.

Snow was expected to fall to 300m in Southland, and 400m in Dunedin and North Otago. The Canterbury foothills would also get a dusting of snow on Saturday afternoon.

"We would recommend not to pack away the winter jumpers just yet."

Aucklanders should prepare for some severe wind gusts and rain, with a maximum temperature of 15C feeling like 11C or 12C, she said.

There was a chance the wind could reach warning or watch level, but forecasters would not know until closer to the time, she said.

Wellington would start off with gale-force northwesterly winds, which would change to a cold southerly into the afternoon.

"We are looking at periods of rain with that as well."

The poor weather would begin to ease off on Sunday into Monday, but it would be a "slow improvement", Ms Elke said.

Victoria University political science Professor Jack Vowles said the bad weather would definitely put a certain number of people off voting, but the number would be small in proportion to overall voter turnout.

He said there was also a degree to which the cold weather might affect party support.

"In urban areas people tend to be closer to polling places so they have less trouble to get there, in rural areas where the population is less concentrated it's further to go."

Dr Vowles said assuming one party had more urban support and another more rural, it may effect how many votes each party received on the day.

However, WeatherWatch said there would be some sunny spells among the wind and rain, which would give voters the chance to make a dash to their voting station.

"Unfortunately we have a big spring low crossing the country this Friday, Saturday and Sunday and it will bring a mix of gales, rain, sun and showers," head weather analyst Philip Duncan said.

"Conditions on Saturday will be a bit stormy for some, but sunny, calmer, spells will also be in the mix -- it is spring after all.

"It's still too early to lock in the best time to go out and vote but despite the wind and the rain we still see plenty of opportunities for people right across New Zealand to get out and vote this Saturday."

* Whangarei: Showers and strong, gusty westerlies, and a high of 16C.

* Auckland: Showers with strong, gusty westerlies, and a high of 15C.

* Hamilton: Showers, and strong, gusty north-westerlies. Temperatures will reach a maximum of 14C.

* Tauranga: Showers with strengthening westerlies. A high of 16C.

* Wellington: Periods of rain, with winds changing to cold southerlies, and a maximum temperature of 13C.