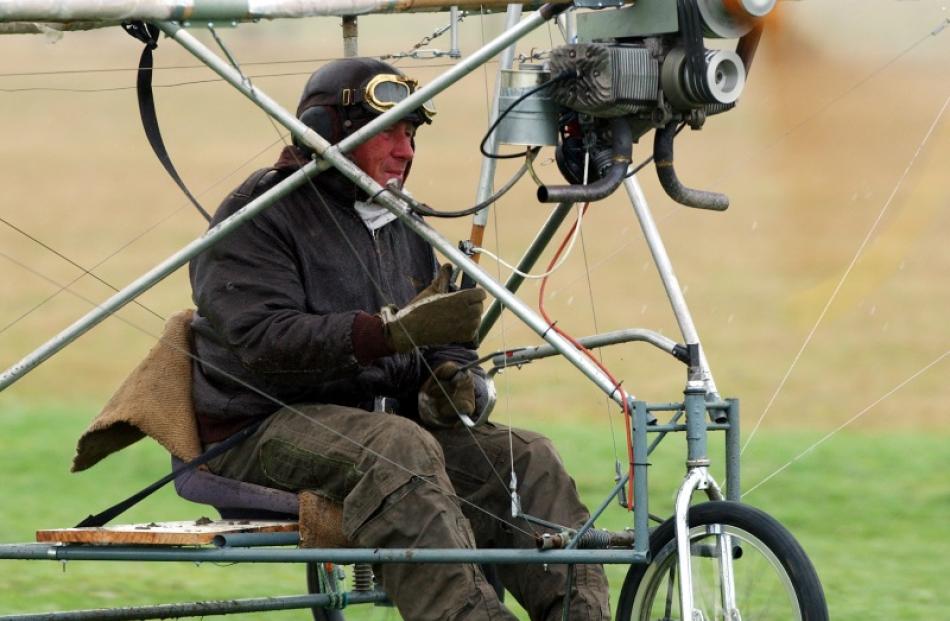 Jack Mehlhopt at the controls of a bamboo and bicycle tubing aeroplane in 2003. Photo by Getty

The veteran pilot of a microlight which crashed in Timaru on Friday, killing two people, had been flying for more than 70 years.

Alfred "Jack" Mehlhopt, 86, was at the controls of the New Zealand designed and built Bantam B22 with Canterbury Senior Sergeant Randel Hohi "Randel" Tikitiki, 51, on board when it crashed on farmland 11km north of Timaru.

They had taken off for a routine training flight from Richard Pearse Airport, in Timaru around 7pm, but crashed on farmland 30 minutes later.

"He was a true icon of aviation really and a hell of a nice man, as were both of them."

Mr Tikitiki had been a member of the club for several months and was under training, Mr McLeod said.

Mr Mehlhopt's family released a statement describing him as a loving father, uncle, grandfather and great-grandfather who would be missed by his friends and family.

"Jack was an extremely experienced aviator having held a pilots licence since the age of 16.

"Aviation was his lifelong passion. The fact he is never coming home again is something that is very hard to get your head around."

They noted he had sent at least 300 students on their first solo flight - some of which had gone on to become air force officers, airline pilots, and flight instructors.

Once when asked why he did so much, Mr Mehlhopt said he had never forgotten the support he had received early on in his flying career, and believed he had a duty to make his own contribution.

In 1996, he was honoured by the Federation Aeronautique Internationale with its Air Sport Medal in recognition of his outstanding contribution to general aviation.

Canterbury Police district commander Superintendent Gary Knowles said that Mr Tikitiki's death had rocked not only the community in Timaru but everyone at Canterbury Police.

"Randel was a valued friend and colleague to many in New Zealand Police and a respected member of the community in Timaru."

The father of two twin girls had worked for police for 28 years, following in the footsteps of his father, Mr Knowles said.

"His professionalism and passion for the district will be sadly missed. The thoughts and prayers of everyone at Canterbury Police are with the friends and families of Randel and Jack, two men who made a real difference to so many lives."

The families and friends of both men were being supported by Canterbury police and Victim Support. Their deaths have been referred to the Coroner.

A police investigation was underway and investigators from the Civil Aviation Authority were due to visit the scene yesterday.

- By Brendan Manning of NZME