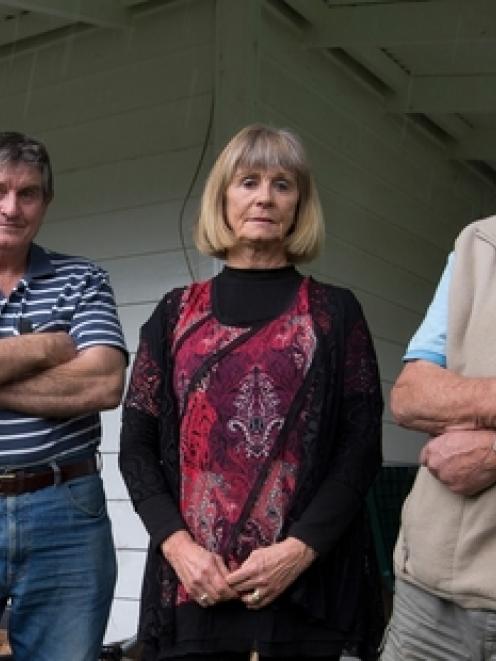 Arthur Allan Thomas' family (above, from left), Des Thomas, Margaret Stuckey (nee Thomas) and brother-in-law Buster Stuckey. Photo: NZ Herald/Brett Phibbs
"Stinkin' bastards," says Des Thomas, leafing through the police report into the murders that have consumed his family's life for 44 years. "Jeannette and Harvey Crewe were brutally murdered and they're not interested."

Instead, he said, police were more interested in shoring up the findings of an inquiry officers are finally admitting was deeply flawed.

"They haven't moved on from 1970," he said of the review, which has left the family deeply dissatisfied.

In doing so, it made everyone linked to the farm at the time of the murders a suspect, he said.

"They're picking out some family member. At this stage we need a full public inquiry with someone who is willing to listen to the Thomas family.

"We feel cheated. How can it be over when there's a murderer running around? Surely Rochelle Crewe would be better off knowing who killed her parents. That's what we want too.

"All we want is justice but we don't know who we're going to get it from."

He said the family had evidence that police never sought, and had not been considered in the review. Their frustration is compounded by a determination that a local man should be investigated for the murders - a link dismissed by the police in the review as having no "credible evidence" to warrant an investigation.

The finding that inquiry head Detective Inspector Bruce Hutton likely planted evidence was the closest police had come to confirming the royal commission of inquiry findings in 1980.

"We've been expecting it for 40 years," said Mr Thomas, who believed police should have prosecuted Mr Hutton before he died.

He said he couldn't accept an apology from Commissioner Mike Bush, who spoke of Mr Hutton's "great character" at his funeral last year.

"They've taken care of what Rochelle wanted - she didn't want any member of her family accused. That doesn't mean the case has been solved. Does Rochelle want to know who murdered her parents? I think she just wanted her family exonerated.

"We can say Arthur Thomas never did it and no member of the Thomas family did it."

Mrs Stuckey said she wanted to know why the review wasn't done immediately after the royal commission of inquiry in 1980.

"If they thought the Thomas case was going to die today, that's not going to be the case. As far as we are concerned, the battle carries on."

Police hinted at the findings when they showed an intense interest in the family last year, she said.

"When they came to see us, they said all the evidence pointed back to the Thomas farm, but the milkman or the postman or anyone could have done it."

The review stated Arthur Thomas had two alibis - from his former wife Vivien and cousin Peter - which had never been challenged by other evidence.

It also said the evidence pointed to the Thomas farm but "the number of persons who had potential access to these items is now unknown".

One Thomas brother had surrendered a rifle for testing.

Others, including the Stuckeys, were asked for alibis. When the Stuckeys provided details, decades of mistrust in the police handling of the Crewe inquiry led them to seek a lawyer to pass along the information.

Other family members secretly recorded interviews carried out by detectives so they would have their own record.

Said Buster Stuckey: "It hasn't cleared us. If anything it has put more doubt over us. It's just a cover-up. We want the truth. Who killed the Crewes?"

The Hutton family had little to say about the findings yesterday. Ivy Hutton, who married Mr Hutton after the Crewe investigation had passed, described criticism of her late husband as "very hurtful" but said he only rarely spoke of the case.

Police review into the Crewe murders

1 No new evidence came to light to lead police to a culprit. But they were able to rule out Jeanette Crewe's father Len Demler - prime suspect in the early stages of the investigation, her sister Heather Souter and local farmer John Eyre.

2 The review identified a "distinct possibility" that Exhibit 350 - a brass .22 cartridge case - may have been fabricated evidence, and if so, would have been planted by a police officer. The cartridge case was a key factor in convicting Arthur Allan Thomas of the murders.

3 Police stood by the view of former Solicitor-General Paul Neazor who in 1981 said there was insufficient evidence to implicate a police officer in corruption. But David Jones, QC, concluded there was enough evidence to charge former investigation head Detective Inspector Bruce Hutton with attempting to pervert the course of justice.

4 Police found significant evidential links with the Thomas farm: The wire found around Harvey Crewe's body, the axle holding him submerged in the Waikato River and the murder weapon were all believed to be from the premises.

5 It was unlikely someone fed the Crewes' daughter Rochelle, then 18-months-old, for five days after the murders took place, the review said.

6 Police detailed numerous shortcomings by the original investigating team. "Exhibit management, handling and documentation ... lacked thoroughness and potentially compromised the integrity of the investigation," the report said. Evidence was lost, large amounts were destroyed and many people who should have been questioned were not.

7 After describing Hutton's integrity as "beyond reproach" in a eulogy, police Commissioner Mike Bush said the review's findings added to his "deep sense of regret at having agreed to speak at the funeral". He also apologised to Rochelle Crewe for police not instigating the review sooner after Thomas' 1979 pardon.

8 Three previous adverse events in the Crewe's lives were overlooked: a burglary in 1967, a house fire in 1968 and a hay barn fire in 1969. The report said uncovering who was responsible was given insufficient priority at the time.

9 Arthur Allan Thomas told police through Peter Williams, QC, - the lawyer who had him vindicated - that he declined to participate in the review. Yesterday, Deputy Commissioner Grant Nicholls said the "door was open" to speak to Thomas but he did not apologise.