Diver death: 'Everyone was in shock down on the beach' 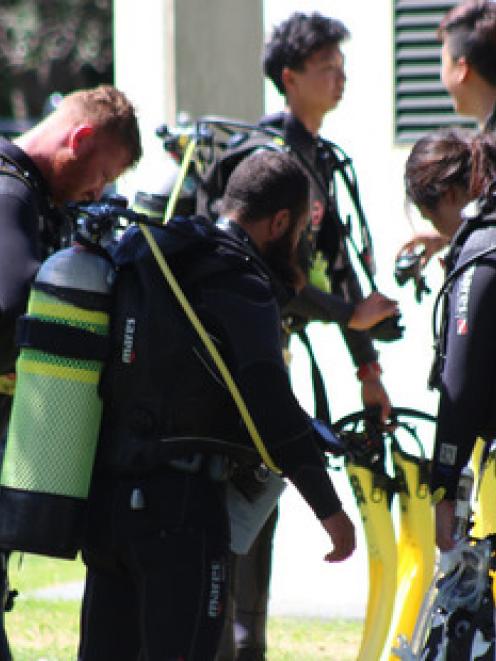 Divers take part in a safety briefing at Mathesons Bay, Leigh, hours after one person in a diving party drowned. Photo: NZ Herald
A man has described the horrifying moment a diver was dragged up on the beach at Mathesons Bay suffocating and "foaming from the mouth and nose".

The 47-year-old, believed to be visiting the country from the United States, was diving with a group of people when he died in the water at Leigh, near Warkworth, at 11am yesterday.

Experienced diver Daniel Lawson said he had been on the beach preparing his diving gear when another diver called out for someone to ring emergency services.

"I was there with another friend and giving her an unofficial diving refresher course ... and we were just about to enter the water and saw a group of divers out probably half way towards the island in the channel. A diver swam back pretty quick and he was calling out for an ambulance so we got on the phone pretty quickly," he said.

"There were a lot of experienced divers out.. and some people brought the man back to shore. Everyone worked really well as a team to get him back."

Mr Lawson said the man had taken on a lot of water and looked to be suffocating.

"It was not a very nice sight obviously. He had taken on a lot of water, was suffocating and was a really, really purple and blue kind of colour and foaming from the mouth and nose," he said.

"Having been trained to deal with those sort of circumstances you know it is pretty unlikely they are going to survive but you just do everything you can."

Mr Lawson said emergency services provided CPR to the man for 45 minutes before his body was covered and removed from the beach.

He said the other diver who had swum to shore to raise the alarm had also required medical attention due to overexertion.

"He was really affected by the situation. I'm not sure if he went unconscious himself but he definitely had to be put in the recovery position himself and provided oxygen for the next hour. As you can imaging swimming quickly with a whole lot of diver gear on is tiring work.

"It was a lovely Sunday morning and perfect conditions for swimming, diving, socialising and there were a lot of families around picnicking and when you have two fire engines and a couple of ambulances and police it all turns pretty sombre pretty quick."

"They had just reached the dive site so it was pre-dive not post dive and he passed out ... there were other divers around him. One diver went to call for an ambulance and the others towed him back to shore."

She said the man was visiting New Zealand from the US and was out diving with a group of certified divers who belonged to the OCD Divers Club -- an informal group of experienced divers who meet for dives -- when the incident occurred.

Police said the man held a current dive ticket and participated in a safety briefing that was held before the dive.

His death has been passed to the coroner. The possibility of a contributing medical event was raised and will form part of the coronial enquiry.