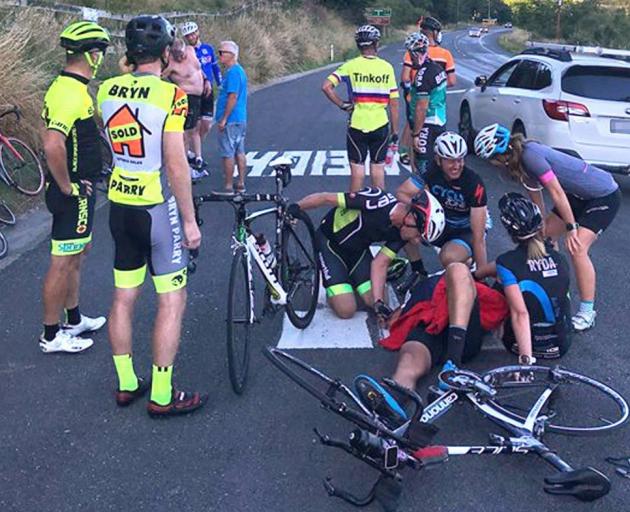 Bunch riders support one another after the crash on State Highway 30. Photo: NZME
A driver hit a cyclist at an estimated 80km/h - sending him flying over the bonnet before fleeing the scene.

A second cyclist riding as part of a group was also injured in the collision and had to be taken to hospital.

The incident happened on Thursday night on State Highway 30 near the intersection with SH5. About 15 Cycling Rotorua members were riding back from racing in Waikite Valley at 7.30pm when the driver of a black Ford sedan struck one of the cyclists.

Cycling Rotorua secretary Kevin Prosser told the Rotorua Daily Post the male cyclist was "thrown off his bike, went over the car bonnet and on to the road on the other side".
As the cyclist was hit, he clipped the rear wheel of another rider, who swerved into a third rider.

The third rider crashed and was later taken to Rotorua Hospital with moderate injuries.

Prosser said it was "miraculous" the man hit by the car survived with just grazes.

"I reckon it could have been a lot more serious. He is a tough old guy, it's unbelievable he was okay, but he will be pretty sore today."

Prosser arrived soon after the crash, driving the trailer of race signage back to town and briefed on what happened.

This morning, Prosser confirmed the hospitalised rider had been discharged.

New Zealand representative mountain biker, Sam Shaw, was riding on the verge side of the fallen cyclists.

He said the group was riding three abreast, in the wide road shoulder for the weighbridge, outside of the white line marking the road edge. 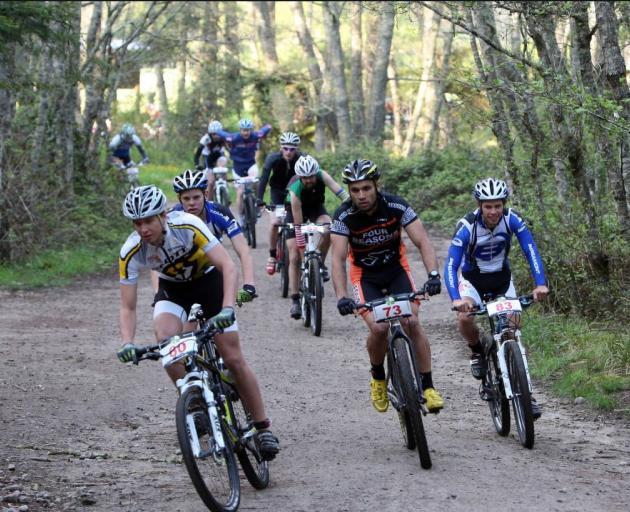 Sam Shaw, left, leading the pack in the Whaka100 race in Rotorua in 2011. Photo: NZME
"We were about 300m from the intersection. There was a lot of space for cyclists in that area... From what I saw, [the driver] just drove up behind the cyclist closest to the road at the front and didn't move.

"He kept his speed between 80km/h to 100km/h, and clipped this guy, hit him up the rear, then carried on and drove off."

Shaw said the cyclist that was directly hit ended up on the other side of the road.

"That could have killed him for sure but there was no oncoming traffic luckily... It was just mindblowing that someone would just drive into someone and then drive off. He just took off at the same speed."

Before that, the cyclists had finished the club race and "everyone was saying what a great evening it was".

None of the riders got the number plate of the vehicle as they tried to stop further falls.

"We only saw that the number plate started with F and that was it."

Shaw, 26, includes road cycling in his training for fitness.

He said he had experienced a lot of aggressive behaviour towards Rotorua cyclists, but this was the worst he'd seen.

"I've had people, hit me with their arms out of the window, throw eggs, scream, drive past at like 120km/h as close as they can and scream, toot, or just that kind of stuff here, but I haven't seen anyone hit before."

Two St John vehicles treated cyclists at the scene of the crash near Whakarewarewa Forest.

This morning a police spokeswoman confirmed inquiries into the crash were ongoing.

"He said the group was riding three abreast, in the wide road shoulder for the weighbridge, outside of the white line marking the road edge".
The law states two abreast, so the cyclists are in the wrong here.

nivaman, regardless of the cyclists riding three abreast, I'm pretty certain running into them with your car, and fleeing the scene of an accident is also illegal. I wouldn't mind betting the police are more interested in the driver's behaviour than the cyclist's.
Perhaps you're not aware, but there are no road rules that only apply if other road users are behaving themselves!