Earth Hour not without its grinches

When millions of people around the world switch off their lights for Earth Hour tomorrow night, cynics will be turning on all of their lights and appliances to protest "the global warming hoax". 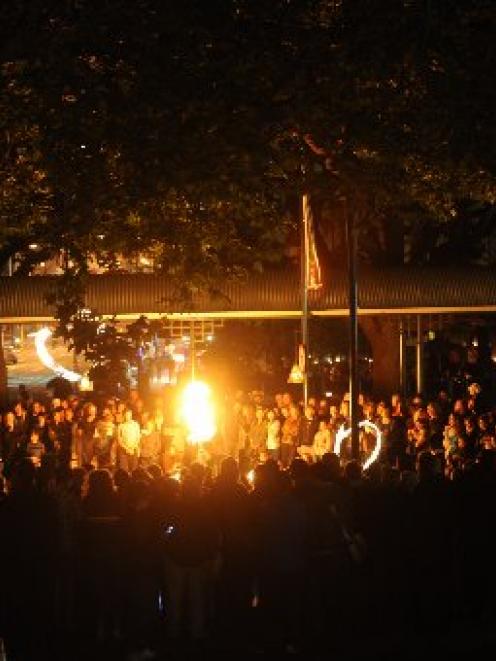 Crowds gather for Earth Hour celebrations in Dunedin's Octagon last year. Photo by Peter McIntosh.
They are among climate change deniers, libertarians and celebrants of Edison Hour -- named for Thomas Edison, credited with inventing the lightbulb -- who not only refuse to switch off, but plan to recognise enlightenment and technology by wasting as much electricity as possible during the hour.

Die-hard supporters of the event will spend the hour in the dark conserving energy in what organisers the Worldwide Fund for Nature (WWF) call "a powerful symbolic act" against the scientific reality of "catastrophic climate change".

Others may keep their TV on -- using the same amount of electricity as 10 energy-efficient bulbs -- or burn candles, emitting carbon dioxide.

At the other end of the spectrum, Edison Hour celebrants will use as much power and energy as possible "to celebrate the advancement of mankind".

ACT on Campus, the youth wing of the ACT party, is rallying against the event, with national president Rick Giles last year calling Earth Hour "an embarrassment ... based on phoney science in an attempt to promote phoney awareness".

The group last year planned to ignite petroleum-powered products, such as a lawnmower, in Cathedral Square "in a public display of enjoyable energy use in the promotion of the pleasure and modern convenience of unfettered energy exploitation".

Others who wouldn't be taking part included those in favour of using energy-efficient lightbulbs year-round to save power and help the planet, rather than a one-hour switchoff.

If every New Zealand household swapped their incandescent lightbults for energy-efficient ones, it would save up to 0.6 billion kWh of electricity or 106,800 tonnes of CO2 equivalent a year, WWF says.

The savings from those bulbs would equate to about $25 million off electricity bills.

Mr Mardon says the light output of Ecobulbs was the same as incandescent bulbs, but they use only 1/5 of the power.

Those planning to use candles during Earth Hour should also think again.

Burning a paraffin candle will release about 10 grams of carbon dioxide in an hour, with about 38 candles required to produce the same amount of light as a 40-watt lightbulb.

But WWF New Zealand says the point of the event isn't saving power -- it's sending a message that "New Zealanders want to take action" against climate change.

But it's important that people who switch off their lights for Earth Hour make behavioural changes, like turning off unnecessary lights regularly and switching from cars to more sustainable modes of transport, like buses, she says.