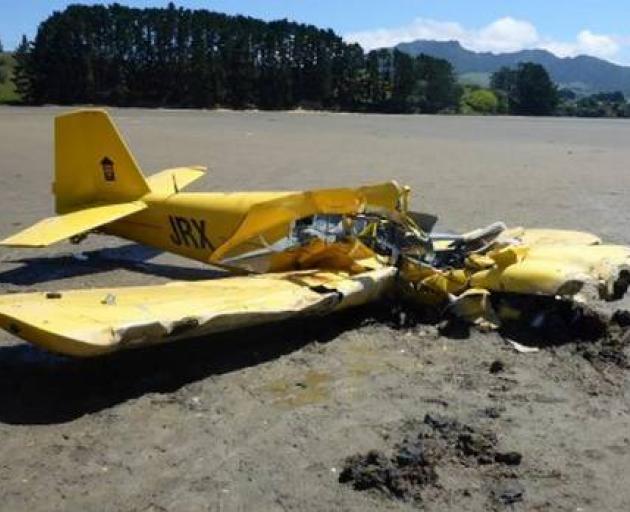 Pilot Peter Cree and his passenger Louey Sandlant both died on impact when the home-made plane crashed in 2018. Photo: CAA
The pilot flying a small aircraft that crashed into Raglan mud flats, killing himself and a passenger, did not hold the correct licence to fly that plane.

Marlborough pilot Peter Cree, 64, and his 33-year-old passenger Louey Sandlant were both killed on impact when the single engine aircraft he was flying crashed on December 17 in 2008.

In a Civil Aviation Authority report released today chief executive Dean Winter said the tragedy could have been avoided if Cree had followed aviation rules.

"These rules are in place to keep pilots and the public safe and in this case a number of rules were broken and two people died," said Winter. "The pilot of ZK-JRX did not hold the required licence or type rating to fly this aircraft, while carrying a passenger."

Cree was approaching the Raglan aerodrome when he lost control of his home-built aircraft during a turn which resulted in a spin he couldn't recover from.

Residents and witnesses told the Herald at the time of the crash that they had seen the plane performing a "strange manoeuvre" before careering to the ground.

A nearby neighbour said he heard what he thought first was a car crash, before his neighbour alerted him to the downed plane.

Together the man and woman raced over to the crash to see if they could help but the two occupants had already died.

The CAA report found Cree and Sandlant left Motueka aerodrome with plans to fly to the North Shore aerodrome, north of Auckland.

They stopped briefly to refuel in Whanganui before continuing north and reaching Raglan just before 3.30pm.

"The CAA safety investigation determined that the aircraft had departed controlled flight during a turn while approaching to land. The aircraft entered a spin to the left, with insufficient height available for the pilot to effect a recovery prior to the aircraft striking the mud flats."

It crashed into mud flats in the estuary just south of Raglan township.

"Although first responders were quickly on scene, the accident forces were not survivable."

Cree had brought the aircraft, ZK-JRX, in June 2017 and gifted it to his son who held a private licence. It was registered in his son's name.

Between 02 November and 16 December 2018, approximately 11 hours flight
time was recorded in the aircraft's technical log. However, there were
no records in the pilot's logbook for any flights having been carried out in ZK-JRX.

The report found the following:

Cree started flight training in 1987 and had recorded nearly 230 hours flying time in his logbook - most of that time was in a microlight. However, he only held a microlight pilot certificate and glider pilot certificate with a current medical validation for both, at the time of the crash.

His microlight biennial flight review was due in April 2018, but there was no record of this having been completed.

The report found the sudden and unexpected departure from controlled flight would have taken Cree by surprise as he would not have been expecting it to occur.

"Cognitive responses to surprise include confusion and loss of situational awareness, and may involve the inability to remember current operating procedures or techniques."

"The effect of surprise may have resulted in the pilot taking the incorrect action when the aircraft stalled and entered the spin."

"Due to the low altitude of the aircraft when it stalled and entered the spin, and not having been adequately trained on the aircraft, the pilot had no chance to recover the situation prior to the aircraft striking the mud flats."

The CAA hasn't recommended any actions as a result of the crash saying the current rules are appropriate.

"The New Zealand aviation system relies on people who actively participate in the system to understand and comply with Civil Aviation Rules. The pilot involved in this accident did not comply with a number of those rules and this resulted in his death, and the death of his passenger."