A photo captioned ‘‘Women vote at their first election, Tahakopa’’, shows a horse-drawn carriage and an unidentified group of men and women standing by the entrance to a building. The photo was taken in 1893, by an unidentified photographer. PHOTO: REF: PA1-O-550-34-1. ALEXANDER TURNBULL LIBRARY, WELLINGTON, NEW ZEALAND. /RECORDS/22311886
On November 28, 1893, New Zealand women lined up to vote in a general election for the first time. Mike Houlahan looks at the day’s events, plus the historical and contemporary influence of the female franchise.

The Evening Star of November 27, 1893, left its readers in no doubt of the importance of the 28th — election day.

"For the first time in the history of the Empire women will exercise the parliamentary franchise," it said.

"We do not exaggerate when we affirm that the eyes not only of their countrymen and countrywomen, but of the whole civilised world, are upon them as to the manner in which they may use their privileges."

When the polls opened the next morning, Greymouth women Mrs McPherson and Mrs Benyon rushed inside to vie for the honour of being first woman to vote in a New Zealand general election — a claim to fame Mrs McPherson secured.

They were joined at the ballot box by slightly more than  90,000 other women — although how many agreed with the Star that they regarded the franchise as a sacred trust and voted with a conscientious consideration of their duty to the state — is a moot point. "They certainly enrolled in great numbers — about 84% of those eligible to enrol to vote did so," University of Otago historian Barbara Brookes, author of A History of New Zealand Women, said. 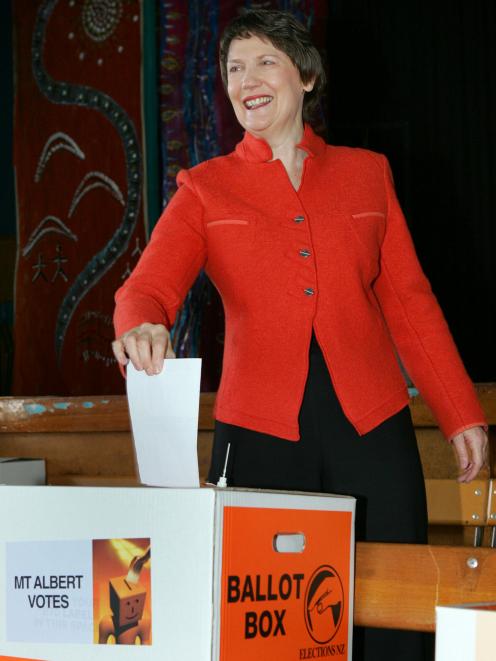 Women continue to exert considerable political influence in New Zealand. Helen Clark, here voting in the 2005 general election, was New Zealand’s second female prime minister. Photo: Reuters
"I think they did hope that they could create a new moral world, many of them did hope to create change, and I think Parliament then became conscious that there was this bloc of women agitators — divorce law reform, for example, followed quite quickly on the enfranchisement of women."

Many suffragists were ardent prohibitionists — several local electorate contests in 1893 were believed by contemporary observers to have been decided on that issue alone.

Janine Hayward,  head of the University of Otago Politics department, said women did have a significant impact on the orderly nature of the general election, and significantly reduced the drunken rowdiness usually associated with voting.

"They did not as voters, with 85% turnout for women, affect the overall outcome of the election — the Liberal government won the election convincingly despite their fears that women may be a conservative force," Prof Hayward said.

"But at the district level they did punish those who had campaigned against women’s suffrage, notably MP Henry Fish (lost his seat), of Dunedin, who had organised two petitions against extending the franchise to include women."

Ever since, the women’s vote has been held as a critical factor in New Zealand elections.

"Women in 1893, like all people then and now, had a variety of political opinions," Prof Hayward said.

Women in Detroit wait to vote in the United States midterm elections this month, where polling suggested a higher turnout by women meant a higher Democratic vote. Photo: Reuters

"But they also, then and now, share a perspective as women which can, under very particular circumstances, see them voting with common purpose."

Overseas evidence suggested women vote differently from men on not only perceived gender issues such as child-care, but also increasingly on issues which used to not be gender-related, such  as military spending and climate/environment policy, she said.

"I’ve looked at why this might be, and one possible answer is that rightist/conservative political parties tend to advocate for hierarchical social and economic relations, and women tend to be less hierarchical than men."

"Of course, it then comes down to whether men show as strong a preference in the other direction, as to whether this is cancelled out."

Despite their importance as voters — the most recent example being the US midterm elections, where polling suggested a higher turnout by women meant a higher Democratic vote — the second gender gap was that women were under-represented in houses of parliament worldwide.

"Women tend to be less focused on economic issues, which might speak to some of the difference," Prof Wilson said.

"That becomes particularly important in elections where social issues are higher up the agenda.

"That’s to say, if economy is not the deciding factor, then the gender gap will tip the scales."

• On November 28 Toitu Otago Settlers Museum and the Ministry for Women are holding a suffrage anniversary event, "Kate Talks".