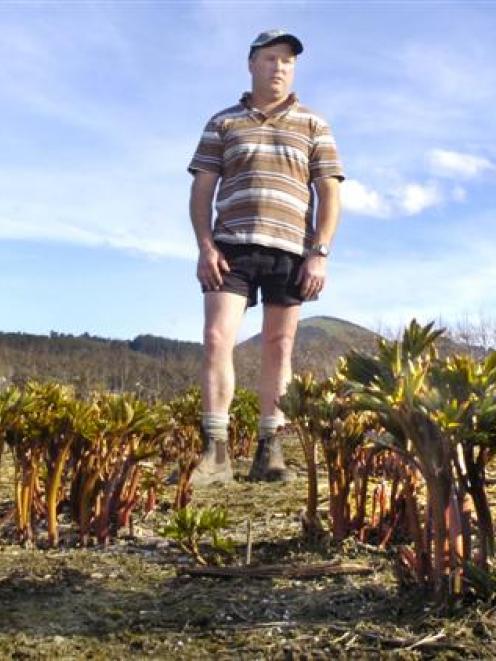 Rodger Whitson, the national president of the New Zealand Paeony Society, with paeony plants on his property near Mosgiel. Photo by Jane Dawber.
Just weeks before harvest, paeony growers in the South are hoping they will be able to introduce measures to get around a United States ban on all New Zealand flowers and foliage imports.

The ban follows the discovery of light brown apple moths on a shipment of flowers grown outdoors in the South Island and comes as the orchid season is peaking.

New Zealand Paeony Society president Rodger Whitson, who has a property near Mosgiel, said negotiations involving the Ministry of Agriculture and the US Department of Agriculture and grower groups would be taking place this week to see if an acceptable risk management programme could be introduced.

He was hopeful this could be done before paeony picking starts. In Otago, this will be in about six weeks, but in Nelson and further north, harvesting begins in about four weeks.

The US is the biggest market for New Zealand paeonies, worth up to $2.5 million, and accounts for 30% of the export trade in cut flowers. (In the year to June 2007, New Zealand flower exports totalled $42.8 million.) Californian authorities are spending millions of dollars trying to eradicate the pest moth, which had naturalised in New Zealand from Australia.

"The ramifications for the industry as a whole are huge. It could be tough times for everybody."

She hoped it would bring the industry, which was quite fragmented, together and drive more monitoring of growers' processes, such as spraying.

She and Mr Whitson agreed that exporters flooding the market with blooms they could not sell to the US would be bad for all commercial growers.

Although growers already sprayed for pests, Mr Whitson anticipated changes required might involve the way spraying was done, the type of sprays and auditing of the spray programme.

He expected a risk management programme might cost about $200,000 nationally for all flower growers. Mr Whitson, who has almost 7000 plants, had been looking forward to this year's harvest because of the favourable exchange rate.

He has been growing paeonies for about eight years. As with most of the society's 140 paeony growers, paeonies were not his sole income.

Waipiata grower Heather Gilchrist, a committee member of the Otago Commercial Flower Growers Association, estimated there could be up to 50 commercial paeony growers in Otago.

East Taieri grower Gary Pearson, who exports paeonies and hydrangeas to the US, said he was distressed at the ban but hopeful agreement could be reached on ways of monitoring growers' risk management practices.