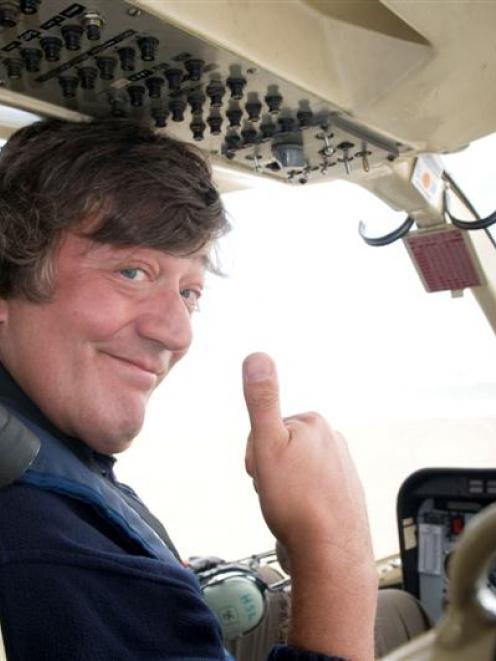 English wit Stephen Fry on his way to Codfish Island on Monday to film a BBC documentary series about the kakapo. Photo by Mark Carwardine.
On the eve of its biggest modern breeding season, the kakapo is set to become one of the major success stories of a documentary series looking at the world's most endangered species.

Fry was in Codfish Island to film the series Last Chance to See, which revisits a book on endangered species written by Hitchhikers Guide to the Galaxy author, Douglas Adams, who died in 2001.

The book, published in 1991, was co-written by zoologist Mark Carwardine, who has reprised his role and returned to check on the progress on the species featured in the book.

While several of the species have become extinct, such as the Yangtze River dolphin, the kakapo has been one of the success stories of the series.

"To some extent, the kakapo is one of evolution's most pitiable errors. On the other hand, there is something in their solemn loveliness.

"When I say kakapo are "evolution's error", it's their complex mating rituals, inability to flee predators and general [sweet] dumbness," Fry wrote in his online blog from the island.

Kakapo Recovery programme manager Deidre Vercoe said the trip had been a successful one for the crew, who witnessed the male kakapo "boom" - a sign the nocturnal parrot was ready to breed.

"Mark [Carwardine] visited the island when the kakapo was on the brink of extinction, so it is pleasing that he has returned with numbers tracking upwards."

It was expected the critically endangered kakapo "would crack the 100 mark for the first time since the 1980s", she said.