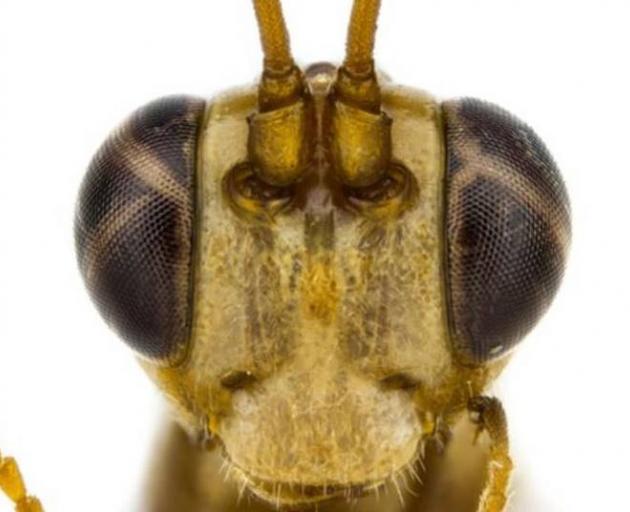 University of Auckland doctoral student Tom Saunders has described a species of native wasp and named it after a character from the Harry Potter series, Lucius Malfoy. Photo: Supplied
A Kiwi researcher is trying to clear the sullied name of our native wasps - and has named one species after an atoning Harry Potter character to push his point.

Many of us think of the species as the introduced German and common wasps which plague us in summer and cost our economy at least $130 million each year.

But, unlike their pesky pest cousins, our native parasitoid wasps don't sting, nor do they live in colonies.

There are thought to be around 3000 endemic species in New Zealand - of which only around a third are known to science.

In a quirky bid to help lift the profile of these hard-done-by insects, University of Auckland doctoral student Tom Saunders has just scientifically described one widespread native species and named it Lusius malfoyi.

"I used the name Lusius malfoyi because Malfoy is a character in the books with a bad reputation who is ultimately redeemed and I'm trying to redeem the reputation of our native wasps," Mr Saunders said.

In JK Rowling's famed series, Lucius Malfoy and his aristocratic family have a sinister reputation, but salvage it in the end when they abandon arch-villain Voldemort.

Writing in New Zealand Entomologist, Saunders and his colleagues also noted how the study of parasitoid wasps could "be described as an enjoyable and 'magical' experience".

They had a gruesome reproductive technique, injecting eggs into the bodies of caterpillars with the larvae feeding inside the caterpillar's body as the host slowly died.
Saunders decided to work on improving methods for wasp capture during his Masters degree because, he said, we may be losing endemic species in New Zealand without knowing it.

"The big problem is lack of data, we do not know what species we have, how many there might be or what their host species are, so they can't be included in conservation planning.

"Much of my work in capturing them for my research was at the edge of the Waitakere Ranges so they can be found even in people's backyards but most people don't know anything about them.

"If we don't put more resources into their taxonomy, we could be in danger of losing wasp species without even knowing it."

Parasitoid wasps were successfully used as environmental tools in New Zealand, with introduced species used to control a range of horticultural pests.

His doctoral research aimed to test the viability of introducing a parasitoid wasp to control brown marmorated stink bug.

"The stink bug has recently been classified as a top environmental threat by the Ministry for Primary Industries and real effort is being made to keep it out of the country.

"Where it has spread, in places like Europe and North America, it is causing real destruction and economic cost."