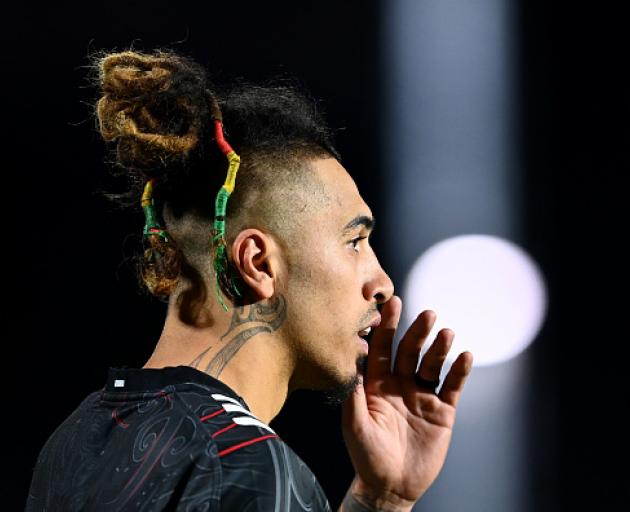 The father of former Crusaders, Chiefs and Māori All Blacks rugby player Sean Wainui has issued an emotional message to Aotearoa following the loss of his son.

Surrounded by whānau, Peter Wainui issued a heartfelt statement thanking everyone for their outpouring of love and sharing the rugby star's memory with the community.

The Wainui whānau was struggling, especially with mourning during Covid-19, but he hoped that one day he and his whānau's hearts will heal.

"Love, a lot of love. I just want to show from us, from my whānau thank you for getting us through this seven days of grieving," Peter told Tūranga FM.

"My lost son, my baby, this guy," he said as he looked down at a photo of Sean.

"Seven days of grieving. Covid did not help. We struggled through Covid.

"But here today I have my whānau. Sean's mum is struggling. His two brothers and sister, a big love to his wife and his two kids and her whānau. We are struggling to this day.

"Seven days won't make us heal. I've got a big hole in my heart. I wouldn't wish this on any parent or parents to dig a hole and have to bury your son."

Sean played 53 games for Taranaki before shifting to Bay of Plenty this year. He also played 44 games for the Chiefs, nine for the Crusaders and represented New Zealand Māori since 2015.

Peter paid tribute to Sean's mana and thanked the rugby community, including the All Blacks, for their support and honouring Sean's legacy.

He also now asked for peace to allow the family to heal.

"He touched a lot of hearts. He's got a lot of mana. I'd like him to keep his mana.

"The whānau needs peace and harmony so we can heal. We need to heal. So whānau, thank you, the All Blacks in America, thank you for sharing the love on the day we buried Sean.

"All his rugby mates, I can't say them all, they're all here with me and with us. Enjoying the moments with me about Sean. All I want is peace, we want peace. My heart will heal.

"I ask whānau out there in the world, give us peace, that's all we ask for.

"This guy (he said while looking at a photo of Sean), he touched hearts. What I want you to do is let us heal out hearts. All we ask for is peace."

Whānau then broke into waiata to pay tribute as a visibly heartbroken Peter wiped back tears.

As the waiata continued, Peter continued to speak: "We just ask for peace, nothing but peace. It's the only way we can heal.

"Love you whānau. I'm going to miss my son out there scoring those tries. We shared his love with the rugby world. So we ask the rugby world to help us to give peace for this guy [Sean]. The one you shared moments with.

The coroner said this week that Sean Wainui's death was being treated as a "suspected suicide".

He is survived by wife Paige and children Kawariki and Arahia.

Eulogies were given by a number of people at his tangi, including Wainui's siblings, father and the Taranaki coach.

"He was a star, he led the back three they called it 'bomb squad' so he could defuse those bombs. I was so proud of him, he took very ball and we're able to carry on and win the case because he inspired, he inspired us with his attributes on the field," a teary Colin Cooper said.

Wainui was spotted by coach Cooper and signed with Taranaki at just 18 years old in 2014.

"The four of us were extremely close and we held each other like the walls of a whare. You will be surely missed but always remain close to our hearts," Luke said.

A Givealittle page set up by the Chiefs to support the family has climbed above $269,000.