0 Comments
What was the hottest summer on record drove the biggest seasonal melt ever recorded at the Southern Alps, Dr Jim Salinger says.

The veteran climate scientist, who gave a presentation to a meteorology conference in Christchurch today, has described the mountain range as a "canary in the coal mine", due to the sensitivity of its postcard glaciers to climate change. 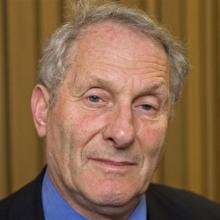 Dr Jim Salinger. Photo: ODT files
New Zealand's glaciers have been losing ice since annual snowline surveys began 40 years ago - a trend that had been in step with rising average sea surface temperatures around the country.

During the usual melt season on the Southern Alps, running from November to March, temperatures had been 2.2 deg Celsius above normal.

This had been coupled with many highs passing over the region, along with a very unusual lack of westerly winds.

At the same time, a marine heatwave that engulfed New Zealand's waters pushed sea surface temperatures to between 2.5C and 4C above average through much of December 2017.

Incredibly, some localised spots off the West Coast even reached between 4C and 6C above normal. This graph shows the volume of ice loss on small, large and all glaciers on the Southern Alps between 1962 and 2018. Last season, the alps lost 3.76 cubic km of volume. Source: Jim Salinger

That was around 9% of the alps' total ice volume - and the greatest annual loss on record.

But he told The New Zealand Herald he wasn't surprised at this result.

"With the warmth, clear skies and lack of weather patterns that produce snow, this was ideal for much melt of glacier ice." 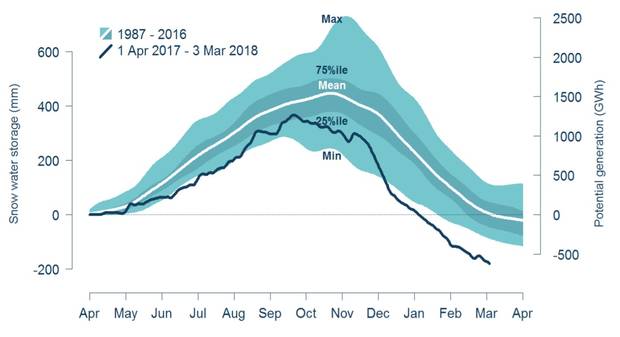 The sorry state of the glaciers had earlier been observed by this year's Niwa-led aerial survey of more than 40 glaciers.

Most of the larger glaciers surveyed had been earlier found to respond quickly to changes in climate.

While smaller ones could change rapidly with year-to-year shifts, some could take many decades to respond because they had a thick layer of insulating rock cover.

Glacier fluctuations were among the clearest signals of climate change, because they were highly sensitive indicators of atmospheric temperature and precipitation levels.

Salinger said some of last summer's records could be attributed to climate change, because this had driven warmer sea temperatures, along with a positive Southern Annular Mode. 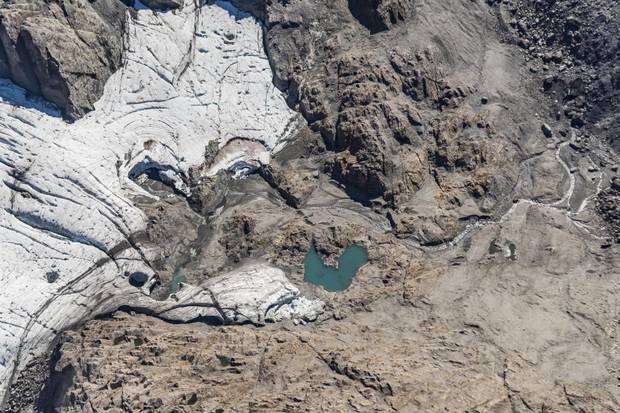 Like an endangered species, many of New Zealand's glaciers are no longer easily accessible and several are on track to disappear completely in the coming years. Photo: Dave Allen, Niwa

"Our alps are the canary in the coal mine for anthropogenic warming because the glaciers are very sensitive to higher temperatures and changed weather patterns in the melt season expected with climate change."

Whether the overall trend of ongoing loss continued was dependent on how the world acted on climate change.

One scenario that assumed future warming could be limited only to another 2C - the ultimate goal of the Paris Agreement on climate change - would see glaciers keep retreating but stabilising by the middle of the century.

But if emissions continued to ramp up without any efforts to curb them, glaciers could become virtually unrecognisable by 2100.

Around the world, glaciers were already melting at an unprecedented rate, losing on average between half a metre and metre of ice thickness every year. 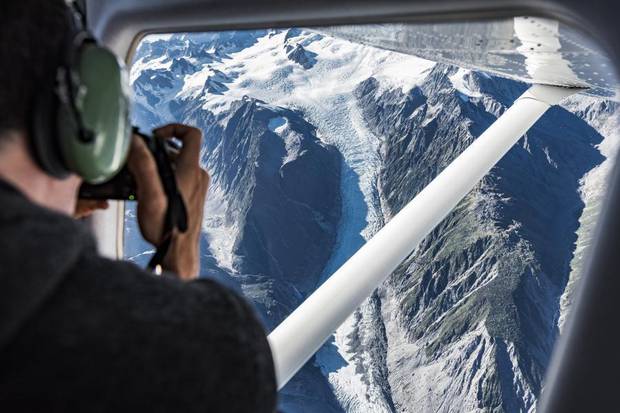 Dr Huw Horgan of Victoria University looks out at the Fox Glacier. Since the 1970s it has fluctuated, but between 2009 and 2018 it has made a dramatic retreat. Photo: Dave Allen, Niwa

ARE CLOUDS MELTING OUR GLACIERS?

Meanwhile, a new study is under way to unravel the influence of clouds on the melting of the South Island's glaciers.

"When it comes to studying the interaction of climate and glaciers, most previous work has focused on changes in air temperature and precipitation - or rainfall and snowfall," explained Dr Jono Conway, of Alexandra-based Bodeker Scientific.

"We know, however, that they are only part of the picture."

It combined with other elements of the climate system - among them clouds, wind and water vapour - to drive what scientists termed the meteorological forcing of glacier melt.

During his PhD research at Otago University, Conway made detailed measurements of the meteorology and glacier melt on Brewster Glacier in the Southern Alps.

"These measurements enabled us to show that clouds influence how much a glacier responds to changes in air temperature - such as that expected in the future," he said.

"The implication here is that, if clouds change in the future, this will alter how much a glacier will melt with climate change." 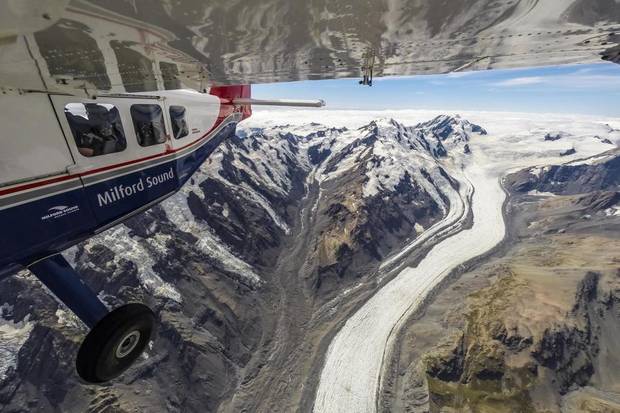 High above one of New Zealand's most famous glaciers - The Tasman. Since 1990 the ice has retreated an average of 180 metres per year. Photo: Dave Allen, Niwa
This formed the central question of a new study he is leading, supported with a $300,000 grant from the Marsden Fund.

"What I'd like to explore in this study is whether we see the same effect over other glaciers around the world," he said.

"Are the same relationships between clouds, air temperature and melt there? Are they stronger, weaker, completely different? "

These relationships might provide a way of explaining why different glaciers respond differently to climate change in different areas.

"Luckily for me, there are many groups around the world who have been making similar measurements on glaciers in other areas with the goal of quantifying glacier meteorology.

"They're really keen for me to use their data to look at the question of clouds."

The first step of his study will be to collate data from other areas and perform the same analyses he did with the Brewster Glacier.

"I've already had a lot of interest, so I might be inundated with data and have to spend getting everything sorted into the same format for analysis," he said.

"It would be great to get data from a large number of areas as it will increase the relevance of our findings internationally." 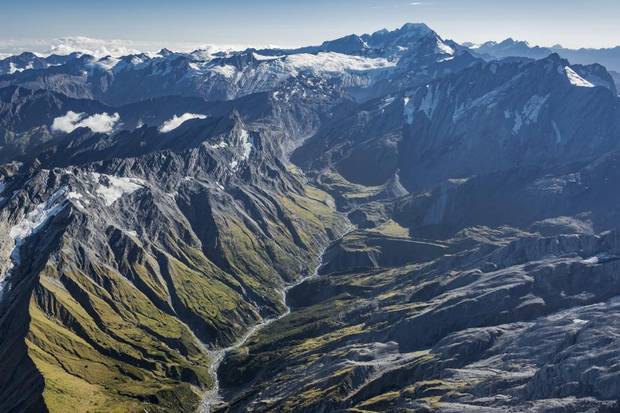 A changing landscape - cold monotones of high mountain ranges give way to warmer greens in Mount Aspiring National Park. Photo: Dave Allen, Niwa
On this part of the project, he would team up again with scientists who assisted his post-doctoral research.

"Together, we installed weather stations on glaciers in the Rocky Mountains that provide an even more detailed picture of the glacier weather than we have at Brewster Glacier."

The second part of the study would look at how well high-resolution weather models predicted the meteorology over glaciers, with a focus on how well they simulate the effect of clouds on the surface.

"If the models do a good job, then I can use the model to understand how the glacier might respond to future climate and how clouds influence this response."

But there would be big challenges.

High-resolution weather modelling was relatively new territory for the science world, and was pushing our understanding of how all the physical processes occurring in the atmosphere interacted in mountainous regions.

"In a lot of situations, the computer kind of gives up and says, nah, sorry, can't do that, the maths is too hard," he said.

"So you have to go in and find out what the problem is, tweak things, and see if things run the next time."

Conway nonetheless expected to learn much about how the glacier-climate system works in mountains.

"The real-world data is always fascinating and often leaves you answering one question but leaving you with many new questions," he said.

"I hope that we'd be able to get the high-resolution weather model to successfully simulate clouds over the glaciers - and that from this we'll be able to assess how things might change in the future."