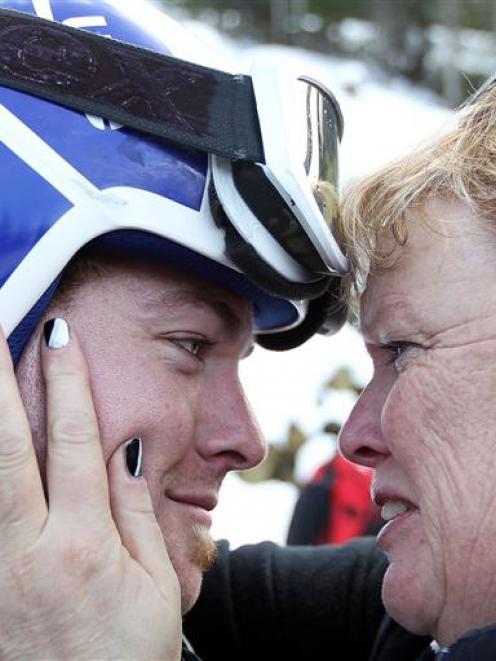 A triumphant Adam Hall is congratulated by his mother Gayle.
Gayle Hall has been at her son's side cheering him on all his life but she has never yelled as loud as she did yesterday.

• Hall pulls out of giant slalom

"It is just amazing and I sort of can't believe it," she said.

"He had such a big lead and it is just as well he did, because he had that wee fall at the end.

"But it was absolutely amazing."

The 22-year-old, who has spina bifida, aced his first run and led by more than two seconds - a huge margin in a sport where medals are often decided by fractions of a second.

In his second run, Hall seemed to be cruising towards gold but took a tumble two-thirds of the way down the course and looked to have blown his opportunity.

But he recovered quickly, and was back up to speed before most of his supporters' hearts had regained a normal rhythm.

"He wanted this really badly and has been dreaming about this day for four years.

"It is a culmination of all Adam's hard work and I'm so proud of him," Mrs Hall said.

Hall could not be reached for comment but told Sky Sports he tried not to think about how the fall would affect his medal chances and "just got back on the horse".

"You don't just come here to get second or third," he said.

"To cross the finish line and see my name and country on the top of the scoreboard was unbelievable.

Praise for Hall poured in from other quarters yesterday, including from his former school, Taieri College.

"There was never any doubt that this young man had remarkable attributes, and these showed today in the realisation of his dream," principal Christina Herrick said.

The school was buzzing when news of the former pupil's outstanding achievement filtered through.

"This Taieri boy with steely determination and a persistence to match, blitzed the field at Whistler Creekside ...

"Adam never let his disability hold him back, and while he was at Taieri College, he set his sights on achieving world-class success in his chosen field of skiing," Mrs Herrick said.

Hall would have had to overcome neural problems in order to compete at such a high level.

"It's phenomenal what these people get up to."

Spina bifida is a neural tube defect caused when the bones which encircle the spinal cord fail to form properly, resulting in the cord being exposed.

This leaves the neural structure prone to damage.

The severity of it varied greatly from case to case, Prof Robertson said.

Hall's type of spina bifida, referred to as L1, affects the lower section of his spine.

As he was able to walk, his nerves would not be as damaged as in other cases, Prof Robertson believed.

"Standard spina bifida does lead to an inability to walk in most instances."

In 2005, Adam was named Sportsman of the Year and was the recipient of the Otago Daily Times Class Act award for displaying excellence in his sporting achievement which was allied to his personal qualities of modesty, hard work and resilience.

Hall is the first New Zealander to win a Winter Paralympics medal since Rachel Battersby won three golds and Steve Bayley a gold and two bronzes at Salt Lake City eight years ago.

He has three events left at the games and will compete in the giant slalom tomorrow (NZ time), the super G on Sunday and the super combined on Monday

Occurs in the early stages of fetal development.

In most cases is diagnosed before birth.

Mild forms do not require treatment

Complications can lead to severe physical and mental disabilities.

Prognosis depends on severity of abnormalities.