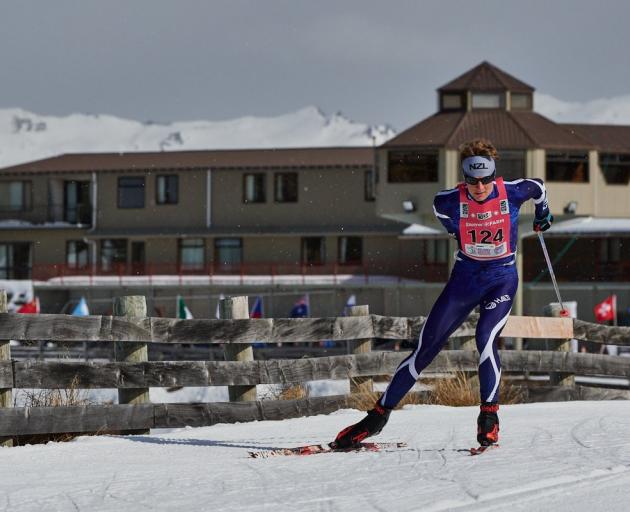 Campbell Wright blitzes the Merino Muster celebration course at the Snow Farm in 2021.PHOTO: GARRICK CAMERON
Lake Hawea biathlete Campbell Wright (19) says his selection to New Zealand Team for Beijing 2022 is a "not just a win for me but a win for the whole New Zealand biathlon community".

The Snow Farm’s young gun is set to become just the second- biathlete to represent New Zealand at the Winter Olympic Games.

Canadian-Kiwi resident Sarah Murphy first represented New Zealand at the Winter Olympics in the biathlon. She finished in 82nd place in both the 7.5km sprint and the 15km individual event at Vancouver 2010.

Wright is the youngest athlete on the IBU World Cup circuit, and was selected on the back of career best form in races this month in Europe.

Competing last week at the Ruhpolding World Cup in Germany, the New Zealander was in 7th place with just 2km to go, when a fall cost him valuable time and dropped him to 25th.

Yesterday, he was 15th at the Antholz World Cup in Italy.

The former Mount Aspiring College pupil has been named New Zealand’s top cross-country skier of the year every year since 2016 and was the New Zealand team flag bearer at the Lausanne 2020 Winter Youth Olympic Games, where he finished fourth in the 7.5km sprint and sixth in the 12.5km event.

In Beijing, Wright will contest the 10km men’s sprint and has received permission to start in the 20km men’s individual, the 12.5km men’s pursuit and the 15km men’s mass start.

"Being named to the team is massive for me. It’s been a big effort ... [and] to be able to represent New Zealand at the Winter Olympic Games is pretty special and I can’t wait to get there. I’m not aiming for any result in particular, I’m just going to race to my potential and see what happens," Wright said.

Wright began cross-country skiing as a youngster and began competing in biathlon in 2017.

"I’m stronger at the skiing so I’m working hard to improve my shooting. The trick is not to overcook yourself before you get to the range. You need to chill and get your heart rate down before you start trying to hit the targets."

"I love it, it’s definitely unique and I get a pretty awesome feeling when I’m out there doing it."

Biathlon New Zealand Chairman Tim David, of Wanaka, said Wright was an amazing athlete and his first Games would be a tough test.

"We’ve watched Campbell grow on the tracks of Snow Farm and at the rifle range of Wanaka Biathlon Club and cannot be more excited by his emergence this year as a true international talent," Mr David said.

The New Zealand Winter Olympics team now has 15 athletes, most of whom live in the Queenstown Lakes district.