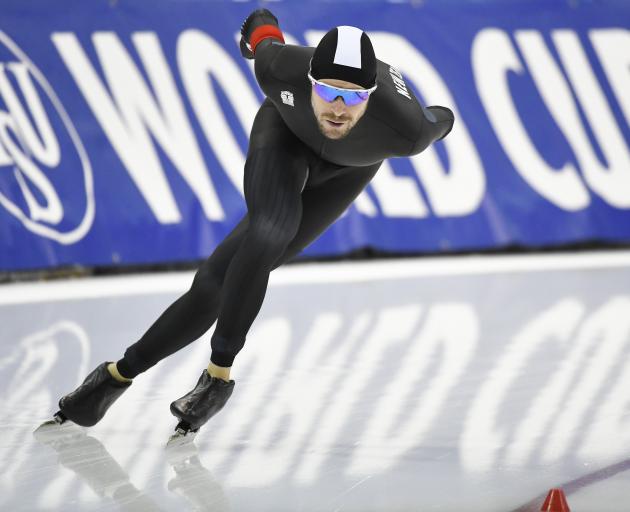 Peter Michael competes in the men's 5000m at the Salt Lake City round of the world cup skating series last month. PHOTO: GETTY IMAGES
Ice speed skater Peter Michael is itching to get back into his New Zealand race suit after being named to compete at his second Winter Olympic Games.

Michael, who hails from Palmerston North, is an inline skating world champion who made the switch to ice after being inspired while watching countryman Shane Dobbin, now his coach, at the Sochi 2014 Winter Olympics.

The switch was a resounding success and resulted in Michael being named to the New Zealand team for Pyeongchang 2018.

Competing at his first Winter Olympics, he came tantalisingly close to a medal, placing fourth in the 5000m and fourth in the team pursuit alongside Dobbin and Reyon Kay.

He said a huge amount of work went into his selection and he was thrilled to be back in the New Zealand team.

"It means so much to me to be selected for my second Winter Olympic Games.

"I’m really looking forward to getting to Beijing and showing what I can do.

"I’m aiming to make some waves over there. I know I’m capable of doing something special and I’m really excited to get racing.

"It’s always an absolute pleasure to put on the black suit and wear the fern. I can’t wait."

"This selection speaks volumes to the efforts and sacrifices Peter has made," Jones said.

"In New Zealand, we have ice rinks suitable for short track, not speed skating, which means Peter has had to live and train overseas, and all during the upheaval and uncertainty of the Covid pandemic.

"The whole ice skating fraternity in New Zealand wishes Peter all the best as he chases his dreams of Olympic success."

Michael is in Germany, where he is training for Beijing.

His first competition at the Olympics will be the men’s 1500m on February 8.