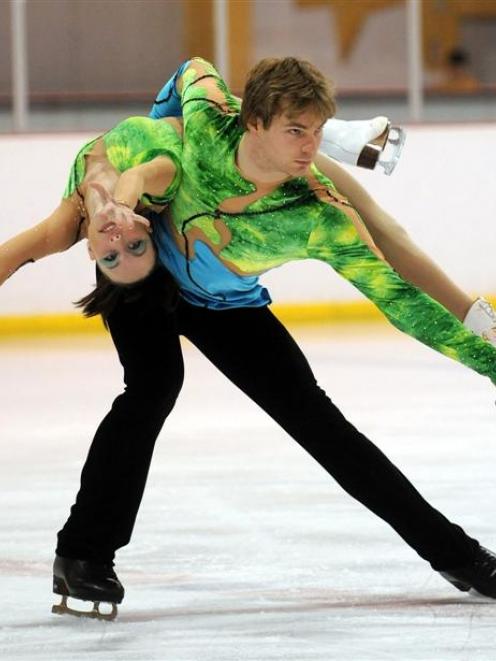 Grant Howie (Dunedin) and Ariel Nadas (Auckland) on their way to winning the senior pairs title at the New Zealand Figure Skating championships at the Dunedin Ice stadium yesterday. Photo by Peter McIntosh.
The Sochi Winter Olympics is the goal for Ariel Nadas and Grant Howie, who have been partners in the ice skating pairs for the past 12 months.

They proved their class when they won their first New Zealand senior pairs title at the Dunedin Ice Stadium yesterday.

They used the cirque du soleil routine, their best element the twist lift that helped them gain a winning score of 71.65 points.

The performance impressed their coach, Mike Aldred, who said they were among the few New Zealand skaters with a realistic chance of making the 2014 Olympics in Sochi, Russia.

Canterbury dancers Ayesha Campbell and Shane Speden were the others, he said.

The pair have trained together seriously for just the past three months, as Nadas (16) lives in Auckland and Howie (22) in Dunedin.

Howie intends to shift to Auckland after completing a BA in linguistics at the University of Otago later this month.

"They have tremendous talent and the dedication that is needed to reach their goals," Aldred said.

Howie started skating in Alexandra when he was in kindergarten and first represented New Zealand in 2003.

His best international performance was winning the Australian pairs title two years ago.

Nadas' best international performance was finishing fifth in the junior solo at the Australian championships in 2007.

It was the second senior title for Hems (20), who has competed at the junior world championships in Bulgaria on two occasions and represented New Zealand at the Four Continents event in Korea this year.

She trailed Dunedin's Morgan Figgins after the short programme but came back strongly to win the long programme yesterday to take the title.