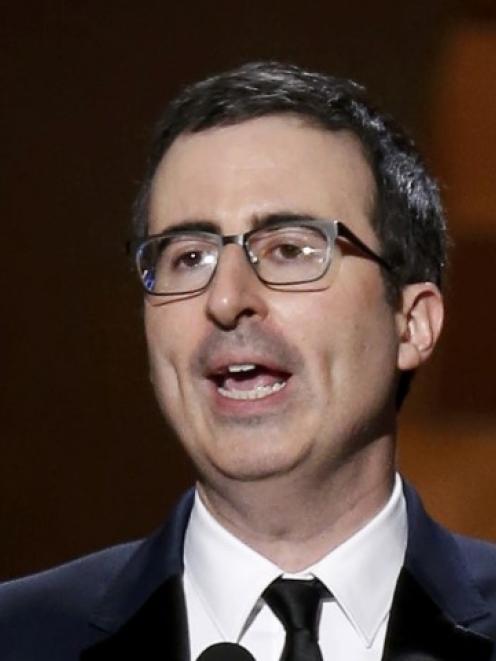 John Oliver. Photo Reuters
John Key has invited John Oliver to New Zealand to witness one of his regular press conferences -- after the Last Week Tonight host deemed the Prime Minister's admission that he urinates in the shower the "greatest political interview of all time".

This morning Mr Key said he had not yet been invited to appear on Oliver's show, despite the British comedian's apparent "fascination" with his utterings.

"He is describing that as the greatest political interview of all time. And I reckon if he enjoys it so much he should come down and be part of the post-Cabinet press conference."

Last week, Mr Key took part in Hauraki Breakfast's game 'Thank You For Your Honesty' in which hosts Matt Heath, Jeremy Wells and Laura McGoldrick grill participants with a series of 10 questions, which they then have to answer truthfully.

Mr Key admitted that he'd stolen stuff, urinated in the shower and that he didn't think the Virgin Mary was a virgin. However, he didn't "trim his downstairs" and neither had he sent a "dick pic".

In the latest episode of his HBO show, Oliver called it "one ray of pure joyful light" after a bleak news week and "the greatest political interview of all time".

"I don't know what I love the most there. The fact he felt qualified to weigh in on the Virgin Mary, the fact he confessed to theft and shower urination, or the admission that he does not trim his pubic hair," he said.

"I actually think the only time he might have lied was regarding the dick pic question, because of course he has sent one. When you're Prime Minister John Key, every pic you send is a dick pic."

Today, Mr Key said he did not know the questions were coming.

"To be honest when I was answering those questions I wasn't thinking John Oliver ... oh for goodness sake, it is commercial radio."

It's not the first time Mr Key has found himself mocked by Oliver.

During the scandal that erupted after Mr Key apologised for tugging on the ponytail of a waitress, Oliver said Mr Key couldn't pass any dangling hair without pawing at it.

"He's more cat than Prime Minister at this point."

Oliver's show has previously had a go at Mr Key and the National Party when it was called out over the similarity between its campaign song and an Eminem track, and he has also had a crack at the flag debate.