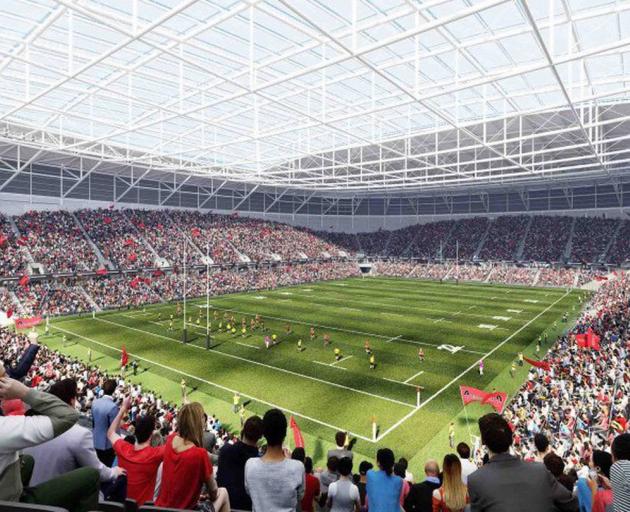 An artist's impression of Canterbury's multi-use arena. Image: Supplied
OPINION: When I announced I was standing for mayor in 2013, I was excited by the fact we were building a new city.

I remember the then Minister for Canterbury Earthquake Recovery issuing a warning to the incoming mayor in Parliament: "I would simply say to anybody who is thinking of standing … to have a look at the finances … and do not be deceived by what you are being told by the people who are presenting those figures."

My response to that when I announced I would be running for mayor was that we needed complete transparency and financial integrity.

Imagine my reaction when I read the "binding agreement" the minister signed with the council just four months before I was elected.

Under this cost-sharing agreement, the council had agreed to fund "our share" of the anchor projects in the blueprint, regardless of the outcome of our insurance negotiations, which hadn't even started. The blueprint had already given our insurer enough information to have us over a barrel, so no wonder it took us so long to settle.

Our residents weren't allowed any say on the blueprint or the financial commitments that were made with the Government. The cost-sharing agreement was not made public until well after the election.

People talk about the "perfect storm" we face today with the cost of building Te Kaha, our multi-use arena, in an over-cooked construction environment making it hard to obtain fixed prices in what is a highly volatile global commodity market.

But as a city, we have had to contend with a lack of funding certainty from the first day of my first term.

It was clear the Government of the day thought Christchurch would sell its revenue-generating assets to pay their share of the blueprint, but the city said no and has continued to say no.

The cost of designing and building a stadium back then was expected to be $470 million, with the council's commitment capped at $253m.

The fact this cost has increased to $683m is not surprising given the "back of the envelope" approach that was used to calculate the costs in the agreement and the reality of these big builds.

Let me use the example of the Convention Centre, Te Pae. This was expected to cost the Government just over $284m in 2013 and has come in at $475m. Luckily, our contribution was capped at $30m, the estimated insurance pay-out for the former convention centre which was demolished.

As a council, we couldn't put $253m in the 2015-2025 Long-Term Plan any earlier than we did, as we didn't settle our insurance until the end of 2015. And we didn't have a Government contribution confirmed until 2018 – by then this was for a multi-use arena, which included a roof covering the entire arena with a minimum of 22,500 permanent seats. Anything less than that would need to be renegotiated with the Crown.

The question we are rightly asking our ratepayers, who will have to foot the bill, is whether we should continue, stop or pause?

I personally think there are only two options: get on with it, or pause.

My heart says I want to just get on with it.

But elected members can't make decisions with our hearts alone. We have to consider all the costs and benefits, threats and opportunities, and so should those who submit. This is not a referendum – we need to hear considered views.

There is no question that we need a stadium, and it needs to be a good one. A purpose-built multi-use arena would be hugely beneficial to the region.

But this is the first time we have been in a position to tell our residents, including those running for council, what the true cost of building a covered stadium of this scale might be.

When we did the investment case the benefit-cost ratio was already .86 - in other words for every dollar we spend the benefit was 86 cents. That will have dropped considerably with the $200m increased spend, but it's not clear what difference to the benefit the additional 5000 seats we included would make.

It's an expensive spend whichever way we look at it.

The other question that needs to be asked is whether this is a market we should be buying into right now given there is so much uncertainty – look at the global price of steel, which has risen and fallen by 25 per cent in the past year. Look at the range of big projects underway in New Zealand, coupled with our exchange rate and shipping costs.

These are the first realistic costs for the last of the anchor projects we have seen and yet this is a time of incredible uncertainty.

Does that give you pause as a ratepayer, or should we weigh that against the Government's contribution to this and other anchor projects, and carry on?

One thing is certain - we are right to ask our residents for their views – it's something that actually should have happened at the start.

At least this time we won't be leaving any hidden surprises in the budget for the next council.