0 Comments
Two of The AM Show's hosts are leaving the morning news show.

Both Amanda Gillies and Mark Richardson are leaving The AM Show for different opportunities at Discovery, a release from the network reveals.

Their departure follows that of former host Duncan Garner, who left citing the brutal hours the job requires.

Gillies is leaving the show to take up the role as Newshub's National Correspondent.

Richardson will continue as the host of The Block NZ and will appear as a fourth host on The Project.

The changes are a part of the show's new strategy to "reinvigorate" the programme - likely in an effort to better compete with TVNZ's Breakfast show.

A statement from Discovery's director of news Sarah Bristow said: "Amanda and Mark have been an important part of the success of The AM Show over the last five years and will remain an important part of Newshub and Three going forward. With the current hosting line-up continuing for the remainder of the year, we will celebrate their outstanding contribution in December.

"Looking ahead to 2022, we have an exciting opportunity to reinvigorate the format of The AM Show. Our focus remains unchanged - to deliver a best-in-class product that sets the news agenda of the day - and evolving the existing format of the show is a natural progression. We look forward to sharing more with you in the coming months."

Ryan Bridge recently took over the role as The AM Show host from Duncan Garner and will continue in his role. 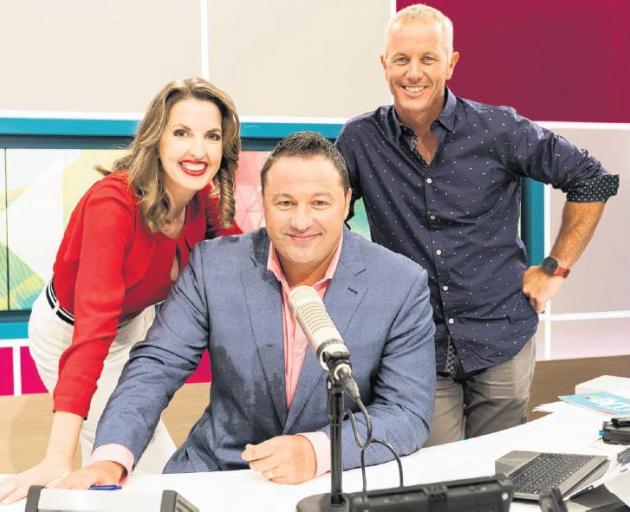 The hosts announced the news this morning live on the show. Richardson and Gillies are staying on for the next two and a half months to help mentor Bridge.

Bridge joked that he felt like "he had BO or something". He paid tribute to his hosts and promised they would "be naughty as hell" for the next few months. He also hoped a bit of them would rub off on him.

Richardson and Gillies have hosted the show together for the past five years.

Gillies said it had been a fantastic run. "So many big stories, so many unforgettable moments and let's face it, so many laughs." She said she would still be part of the Newshub family, just at a different time and with no more early morning alarms.

"I am super excited for our Ryan and I'm super grateful for the wonderful dream team I've worked alongside since 2017."

Richardson said it had been a blast. "I will still be yelling 'tools down' and annoying people on The Project once a week, I just won't be annoying people on this show." He said in the meantime it was still business as usual. "And besides Ryan you are going to need the mentoring from me and Amanda to get you truly ready for next year."

Bridge wished them both all the best. He said they had been through "some pretty serious stuff" and Gillies' naughtiness on camera is something he had always loved watching. "I'm just so grateful that I kind of get to enjoy that part of you on TV every morning. He also admired how surprising Richardson was. "You never know where it's going to go. That's part of the fun, that's part of the thrill."

Garner left the show in August, after hosting the show since its inception in 2017.

Garner, 47, said he had decided to leave the "best job ever" because he was struggling with the "brutal hours".