More golf for Obama before return to Auckland

National leader Simon Bridges had a brief phone call with the 44th US President this morning.

He says Obama described Key as "a terrible golf cheat" after the former president lost at Kauri Cliffs yesterday.

Bridges took the call in the Koru Lounge at Wellington Airport this morning. Obama was with Key at the time.

"Most importantly was the conversation around the golf. He's really enjoyed that but he's not so sure about Sir John's counting on the golf course," Bridges said.

"He may have used the word cheat, but I won't go there."

Key reported Obama had been "relaxed" and the golf "came down to the wire."

He said the teams were "all square" after 18 holes – "Team NZ won on the second playoff hole."

Team NZ was the pairing of Key and billionaire Craig Heatley, who had also flown the Key family up North earlier in the morning.

Key said it was a "great match" and Obama was "keen to return."

"[Obama] was relaxed, loved the course and his first glimpse of New Zealand."

After his first golf game with Obama in Maui in 2016, Key was not allowed to report who had won – but the rules have clearly changed now neither are leaders.

Last night, Obama swapped birdies for real birds, with former US ambassador Mark Gilbert posting an image of the president coming face-to-face with a real kiwi.

Obama will have a chance to even the score on the golf course this morning when he and Key play at another course in Northland - possibly the Tara Iti course at Te Arai - before returning to Auckland. 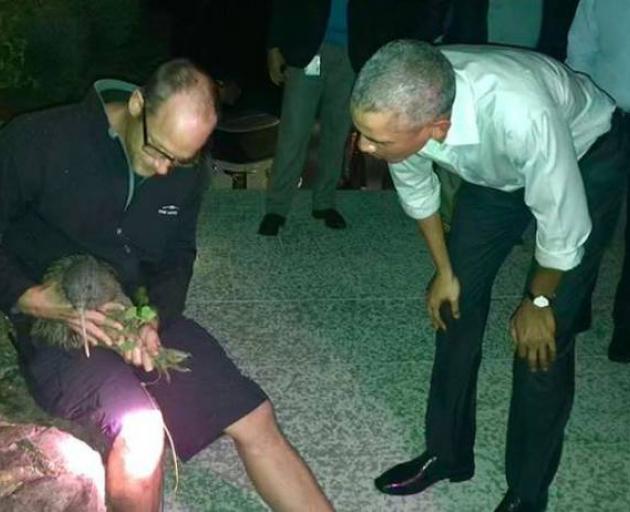 There Obama will be welcomed with a powhiri at Government House – the first opportunity for many to get a close-up look at the President.

He will then have a meeting with Prime Minister Jacinda Ardern, who was remaining quiet about what she would discuss with him yesterday.

The powhiri will be led by Ngati Whatua Orakei and spokesman Ngarimu Blair said while many dignitaries had been welcomed to New Zealand, it was an privilege to do the powhiri for Obama.

"In this particular case, obviously we are excited to do this for someone who had such a huge impact in the United States and also on societies around the world. Everyone prepares their whole lives for these ceremonies so we are not nervous as such, but there is a high level of excitement."

Much of Obama's trip has been at a distance so far – he arrived soon after midnight on Wednesday morning before getting on a helicopter to fly to Kauri Cliffs later in the morning, clutching a cup of coffee and giving a cheerful wave to those watching.

Obama is staying at The Landing, a luxury lodge in the Bay of Islands, and was to have a private dinner with about 20 guests, including Air NZ chief executive Chris Luxon, last night.

Footage of Obama from up North showed him appearing to take plenty of photos of the scenery on his cellphone, as well as high-fiving Key after a good shot.

It also showed Key's game was not without problems – he ended up in a bunker on the 13th hole.

So tonight, for an hour on stage , it's just me and President Obama. Am i nervous? Nah. This cold sweat thing is just me all the time . I'm fine. Thanks.@FlyAirNZ— Sam Neill (@TwoPaddocks) March 21, 2018

Obama's main event will be a dinner and discussion with actor Sam Neill tonight in front of 800–1000 guests at the Viaduct Events Centre. That meal has been chosen and overseen by chef Peter Gordon, who was flown over from London by Air NZ for the occasion. Gordon told 1 News he was told Obama liked fish so had selected New Zealand salmon as one option and steak for the other "because he's from Chicago".

While Obama is steering clear of politics, his speaking event turned into a political football at Parliament yesterday after Regional Development Minister Shane Jones' attacks on Air New Zealand for cuts to regional services.

That prompted National Party leader Simon Bridges to question why Jones was accepting corporate hospitality from Air NZ to attend the Obama speech if he was so angry with them.

Jones said he still intended to attend and was entitled to because the Government was a majority shareholder.

Tomorrow Obama will wind up his visit after a more intimate meeting with about 20 Maori women leaders who are part of the Wahine Toa network set up by Nancy Gilbert, the wife of former ambassador Mark Gilbert. 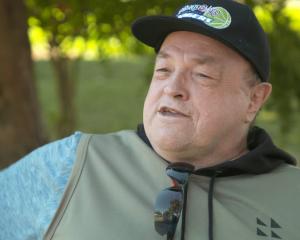 Good on you Barak Obama.....I hope you will become an "honorary Kiwi" like Bill Clinton and drop by for a visit any time you care

Its a shame you didnt manage to get your legislation thru the Senate.....the world was a better place with you and Bill in charge as you are both on the side of the average man.

The current incumbent scares me

Welcome back any time.....like my US friends you'll have to learn to use the word bloody as an adjective to be a dinkum Kiwi