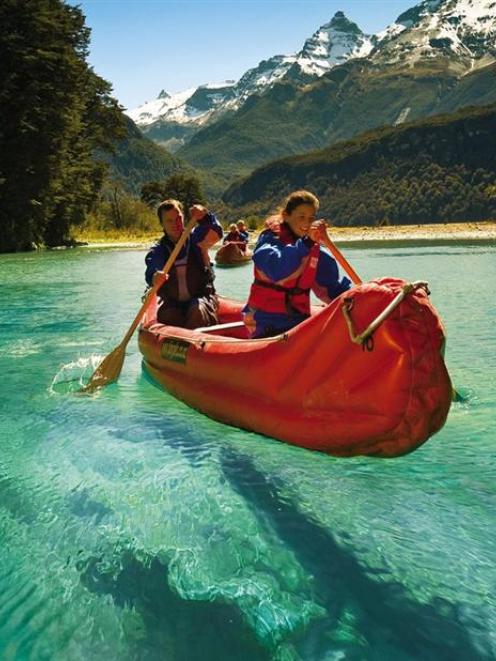 Recreation in the Dart River is perfect on a hot summer's day, but not all of our rivers are so inviting.
An official study finds more than half our popular river spots are too polluted tobe used safely, reports Jamie Morton, of The New Zealand Herald.

More than half of monitored recreational sites on our rivers are unsafe for swimming, a report has revealed.

The results showed water quality was poor or very poor at 52% of monitored river sites.

A further 28% were graded "fair" - having a risk of illness for those swimming there.

Only 20% of monitored river recreation sites were graded good or very good.

Health effects from swallowing water tainted with faecal micro-organisms or other bacteria can be unpleasant. They include diarrhoea or vomiting, and infections of the eye, ear, nose and throat.

The report card canvassed sampling from 210 freshwater beaches, including lakeside areas, and 248 coastal beaches used for recreation that had been assigned grades based on monitoring data acquired over five summers.

Coastal beaches and freshwater beaches at lakes were found to be much cleaner than river sites.

Eighteen percent of coastal beaches were graded as "very good" and a further 42% as good.

Northland, Taranaki, Southland, Bay of Plenty and Marlborough were the worst regions for river quality at monitored recreational sites, although results from Auckland, Waikato and some other areas were not included.

A ministry official said the sites were chosen for their susceptibility to risk factors that might make swimmers sick, as well as their popularity for recreation, and were not representative of the overall water quality in the country's swimming spots.

"It shows what a fake marketing image 100% pure is, and we need to take action to make that image real," she said.

"By undermining the credibility of the brand, people will wake up to that internationally and see there's a major gap between the marketing image and reality," Ms Sage said.

"We need strong rules and water quality standards to clean up our rivers and prevent faecal contamination from agricultural intensification."

Environment Minister Amy Adams said our water quality was good by international standards and most popular sites were fine for swimming.

But she didn't see that as good enough, saying: "My preference will always be for all our sites to be safe for swimming."

Swimming danger
Health effects from swimming in fouled rivers and swallowing water tainted with faecal micro-organisms or other bacteria are largely minor and seldom life-threatening, but can be unpleasant.

Symptoms could include diarrhoea, vomiting, and infections of the eye, ear, nose or throat, while children were particularly at risk of ear and skin infections, said Dr Phil Shoemack, medical officer of health with the Toi Te Ora Public Health Service.

"When you add up all the number of people who are potentially exposed - all the children who might swim in the water or all the people camping whose summer holiday might be at least altered - the impact adds up."

The Environment Ministry also warns of more harmful diseases such as giardiasis, cryptosporidiosis, campylobacteriosis, salmonellosis and hepatitis A.

Dr Shoemack advised people to avoid suspect waterways and not swim for two days after rain.