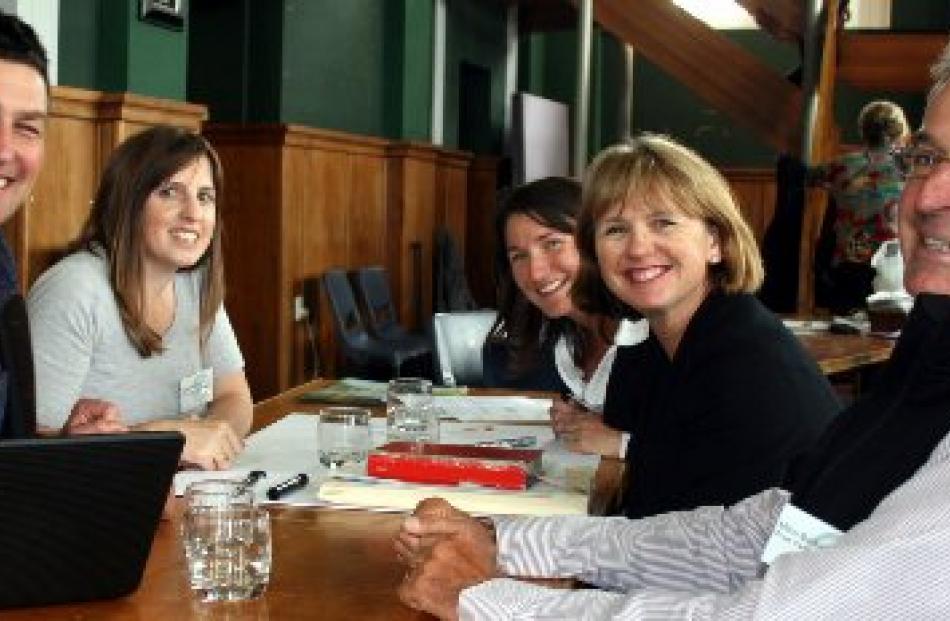 Creating a brand for New Zealand red meat that is verified as meeting fishable and swimmable water quality objectives is the mission of Food, Farms and Freshwater.

The venture is the brainchild of Otago-based environmental planner Rhys Millar and Auckland lawyer Natasha Garvan, who grew up in Oamaru.

They were later joined by Taupo farming couple Mike and Sharon Barton, who market their own beef under the Taupo Beef brand, and they have been aided by their involvement in the Launchpad accelerator programme.

A few years ago, Mr Millar and Ms Garvan were both at a conference where Mr Barton spoke.

He was farming under a nitrogen cap and protecting water quality for future generations, while selling his beef for a premium in top restaurants around Taupo.

Mr Millar and Ms Garvan did not know each other at that stage, but the ''seed was really planted then'' in thinking about the issue, Ms Garvan said.

Some years later, she was keen to work on scaling-up what they were doing, across the country. Her old school friend, Jinty MacTavish, suggested she talk to Mr Millar who had the same idea and she also later visited the Bartons' farm and they were keen to be involved, too.

The Bartons had been a ''source of inspiration'' for both herself and Mr Millar ''from the very beginning'', Ms Garvan said.

A nitrogen cap was imposed on farmers around Lake Taupo to protect its water quality. Faced with what was effectively a cap on stock numbers, Mr Barton sought to increase the value of the product he produced.

The couple created their own brand, Taupo Beef, which gave consumers a guarantee that the product had been grown in a way that would not damage the lake.

It was really the only example of farming under stringent water quality regulations and getting a premium from consumers, Ms Garvan said.

It was ''fantastic'' to have Mr and Mrs Barton on board, and he was offering to gift his knowledge to farmers as the process was rolled out, she said.

Food, Farms and Freshwater (3F) was a ''bit of a working title'' but it encapsulated the issues, she said.

Helping the 3F venture move forward has been Launchpad, which is run through the Akina Foundation with support from Contact Energy and the Department of Internal Affairs.

The programme was designed to take inspired business ideas and turn them into tested, investment-ready social enterprises that would have a big impact on a social or environmental problem.

Six months of intensive support and coaching, including advice from consultant mentors, was provided on 11 ideas. The process had provided sound advice and guidance, Ms Garvan said.

The next step was Launchpad's Pitch Day event on March 31 which would bring together an invitation-only network of more than 200 potential investors, customers and supporters from the private, public and philanthropic sectors.

The 3F venture needed funding so it could continue to develop its plans, with about $400,000 required over two years.

The team was also hoping to attract votes in a ''people's choice'' award, run through The New Zealand Herald's Element magazine, with $20,000 from Contact Energy available for the team with the most votes.

They were seeking to select four catchments as pilots areas to work through the development of scaling-up.

There had been suggestions of catchments and also farmers coming forward wanting to do what the Bartons were doing. They welcomed any farmers possibly interested in getting in touch with them.

Taupo Beef was going to expand its model into new markets of Auckland, Queenstown and Wellington and one export market.

It was very encouraging the Bartons had been approached by a number of specialised food stores to stock their beef, Ms Garvan said.

Expansion of the Taupo Beef model really did validate their proof of concept, Mr Millar said.

They knew there was ''incredible demand'' for the product and now they wanted to put a system in place to allow supply to be matched to demand. The product had to be of high quality.

Creating premiums for farmers was key as, without those premiums, it was difficult for sheep and beef farmers to make the on-farm changes often necessary to achieve water quality standards, Mr Millar said.

Citing the increasing urban-rural divide, he said everyone in New Zealand had a role to play. The proposed model created an opportunity to bring the two closer together.

Consumers needed to understand they had a role in it as well. To date, environmental externalities of food production had not been captured in the cost of food.

There was ''enormous'' support from regional councils, retailers, supermarkets, consumers, central government and a lot of interest from farmers.

Ms Garvan said they were leveraging off the regional councils in the investment for science for limits.

If it was not for that, it would be quite difficult and expensive to build a certification system without robust science underpinning it.

Asked what made her so passionate about the project, Ms Garvan said she loved coming back South.

It was where she grew up and where she went to university and she still holidayed in Otago and wanted to keep it that way.

Having heard Mr Barton speak, it challenged her to say that she had to be part of the solution, she said.

''I'm part of the problem currently if I purchase beef and any other product,'' she said.

The Taupo Beef model resonated with her ''on so many levels'' and she realised she wanted to help scale it up.

Mr Millar always thought there needed to be a stronger connection between consumers and the food they ate, an understanding of where it came from, and the ability to support farmers implementing good practice.

He also wanted to see the ''Kiwi quality of life'', that he grew up with, retained for future generations.