One dead in boat blaze 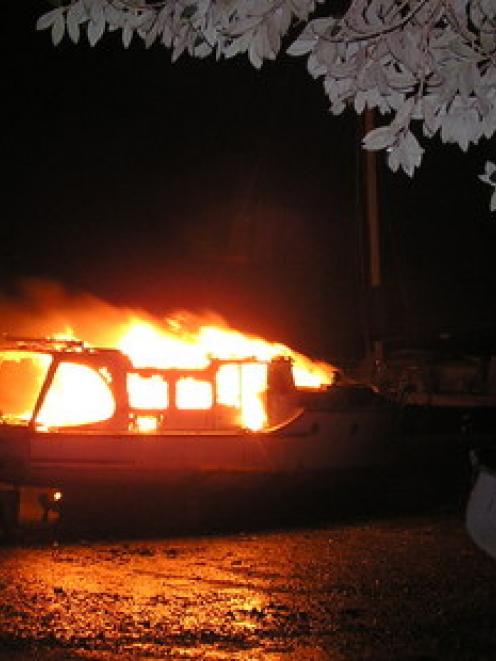 Waiheke boat fire.
A distressed man with burns on his face, arms and hands tried desperately to get help for his friend who died in a boat fire at Waiheke Island last night.

However, the blaze was so intense by the time rescuers arrived there was no chance to save him.

Tom Foster-Christie, 18, was on a nearby boat at Ostend listening to his radio when he was startled by screams and banging on his window about 9.30pm.

The owner of the burning boat - who survived the fire but was airlifted to hospital with serious burns - was trying to get help.

"I heard some yelling and then [he] came and knocked on my window. He was badly burned all up his face and his arms and hands were just all black.

"He wasn't knocking, he was banging and he was yelling that his friend was on the boat.

"He was saying '[my friend] is on the boat'. He was pretty well just repeating that. He looked disorientated and obviously distressed."

The tide was out and the boats were on the sand at the time.

Mr Foster-Christie, an apprentice boatbuilder, jumped out of his window with a small fire extinguisher but quickly realised it would be insufficient.

"It was too late. The doors were open, fire and smoke were billowing out. You couldn't see anything.

By this stage the owner of the boat, thought to be a lifelong Waiheke Island resident in his mid-50s, was lying on the beach being treated by other people who had seen the fire and stopped.

Mr Foster-Christie said he was conscious and screaming in pain.

The injured man is believed to have been living in the boat near the Waiheke Boat Club in Putiki Bay for only a few months.

By Sam Boyer of the New Zealand Herald