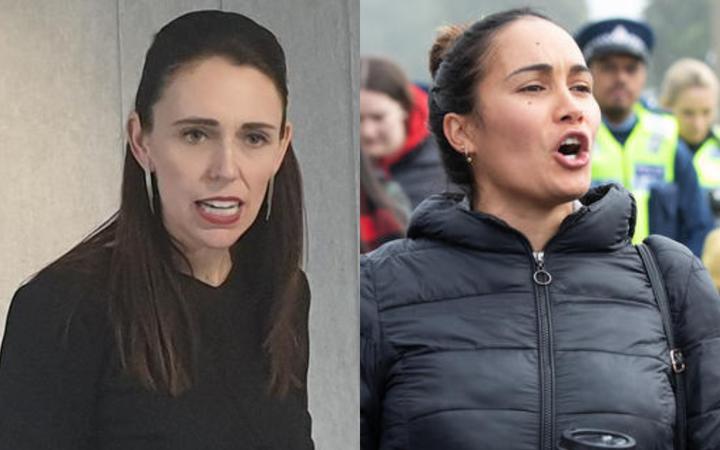 Pania Newton (right) wants Prime Minister Jacinda Ardern to understand why the land means so much to the people defending it. Photo: RNZ
A petition has been launched calling on the Prime Minister to visit Ihumatao, which hundreds of people have been occupying to oppose a new housing development.

It's been 18 days since protesters first invited Jacinda Ardern to visit the whenua in South Auckland.

Ihumatao is believed to be one of the first places where Maori in Tamaki Makaurau settled, farmed and thrived, has been designated to make way for 480 new homes in a city crippled by a housing crisis.

The leader of protest group, Pania Newton, said today she wanted Ms Ardern to understand why the land meant so much to the people defending it.

"During the reclamation, we have reached out to Jacinda Ardern many times, asking her to visit the whenua and meet with us face-to-face but she still hasn't replied," she said.

"Until our Prime Minister experiences this whenua for herself, we won't feel confident she has a true sense of what's at stake or will deeply appreciate why this whenua matters so much and to so many people."

In a video posted to social media, Ms Newton said if the Prime Minister didn't take up the invitation, protesters would march to her parliamentary office.

"If she doesn't take up our invitation on Thursday, 22 August, we will march from Ihumatao to her office in Mt Albert Auckland to hand deliver our new petition.

"When Jacinda became Prime Minister, she promised a kinder approach and we believed her. Under her leadership, the Government can right the wrong of the original raupatu by returning the land wrongfully stolen by the Crown."

Ms Ardern told RNZ last week she had not ruled out visiting Ihumatao in the future.

It has been three weeks since protesters were served an eviction notice by police.

Holidaying when should be here sorting it out.....