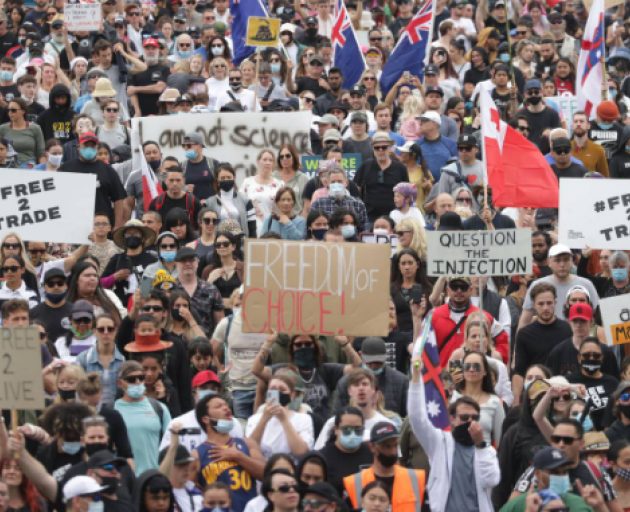 Protesters making their way through Newmarket, Auckland. Photos: NZ Herald
A "number of individuals" will be prosecuted over today's anti-lockdown protest, police say.


An estimated crowd of up to 5000 people marched through central Auckland streets brandishing freedom signs and flags and blocking traffic.

They were closely monitored by police, but no arrests were made.

"Police will be taking prosecution action against a number of individuals in the coming days," he said.

The gathering - a breach of level 3 rules - began at Auckland Domain.

The group marched down Khyber Pass Rd to Newmarket and back, causing significant disruption.

Most were not wearing masks and were tightly bunched.

It was the third freedom protest at Auckland Domain in six weeks.

Police supervised the rally in strong numbers as speakers took the stage.

The 90-minute gathering at the Domain was noisy but free of any major incidents. Rally participants sang the national anthem and a range of speakers addressed the crowd. At 12.30pm, protesters began their march.

Police officers were stationed around the boundaries of the protest and there were at least six police vehicles, including three vans at the rear of Auckland Museum.

Destiny Church founder Brian Tamaki was not present, after being twice arrested over the two previous protests, but his wife was.

She said residents in Auckland were being held prisoner and she does not care if people are vaccinated or not. People should have the freedom of choice. 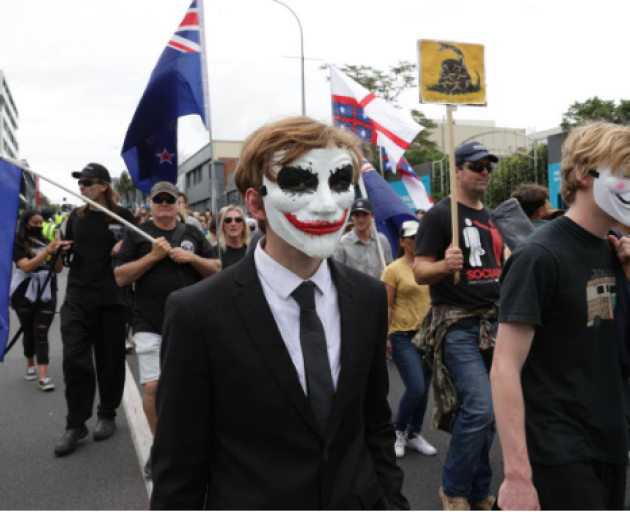 She said she'd had a gutsful of manipulation and being prevented from seeing her other children and mokopuna. "I stand here today unafraid and unashamed."

"My husband is heartbroken he can't be here today."

She said she had to beg him to stay put and not even do a drive-by because of the threat of arrest.

Brian Tamaki first appeared in court on October 2 after helping organise the first protest and was allowed to remain free on bail on several conditions.

He next appeared in court on Wednesday, October 20 facing a charge of violating a Covid-19 lockdown order for his second lockdown protest.

After a stern warning from the judge, he was released again on the same bail conditions he was also accused of having violated.

Auckland District Court Judge Josephine Bouchier addressed Tamaki via an audio-video feed while he sat in a holding cell. Through his lawyer, he pleaded not guilty to the new charge.

Around the same time, a crowd that included his wife Hannah Tamaki gathered outside the police station where he was being held, chanting "Free Tamaki".