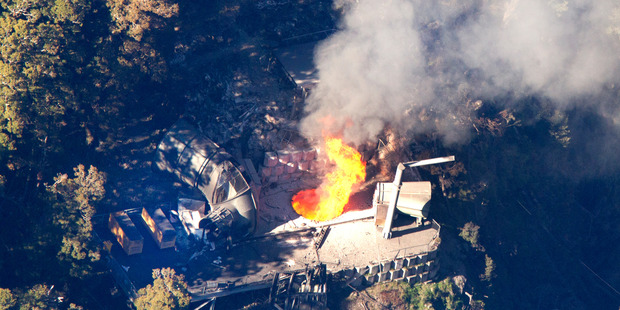 While manned entry is not supported, the Government may be considering an unmanned entry of the mine. Photo: NZ Herald

An aim of sending a robot deep into the Pike River mine drift is to see if there are bodies - although it's unlikely they could be recovered if spotted, the Government says.

Acting Conservation Minister for Pike River Issues Nick Smith faced more questions about the mine today, following publication of footage taken from a robot that entered the mine's drift in 2011.

Smith repeated Prime Minister Bill English's statement that nothing in the video had changed the Government's position that manned re-entry was not possible on health and safety grounds.

But he said work was progressing on terms of reference for a possible unmanned entry.

There were several key aims of unmanned entry, including getting more information about the mine's drift beyond the 1600m mark.

That could help ensure other mines operate safely, Smith said, and gather more information about the electrical and control stations at about the 2km mark.

"And quite clearly - even though the Royal Commission concluded it is unlikely that there are any bodies or human remains in the drift - we would want through unmanned entry to further explore whether there is," Smith said.

Asked if bodies or remains could be brought out if discovered, Smith said the official advice was that is unlikely.

"That was the conclusion of the Royal Commission. We will cross that bridge when we come to it. The Government is committed to the unmanned entry plan that we are working on with the families."

The mine has not been operating since a gas explosion in 2010 killed 29 workers, whose remains have never been removed because of concerns about high methane levels.

The Government has ruled out manned re-entry on health and safety grounds. State-owned miner Solid Energy has control of the mine.

Police and the Government have been accused by some Pike River families of holding back footage taken from a robot that entered the mine drift in March 2011, excerpts of which were broadcast by Newshub on Sunday night.

Police have said that families had been shown excerpts of the video footage at meetings in Greymouth in July 2011. Around 30 family members and supporters were at the meetings.

The Mines Rescue Trust has said that two staff members featured in the video were in a container at the entrance of the mine, rather than deep inside the mine where the methane levels were very high.

Richard Raymond, a lawyer who acted for the Pike River families during the Royal Commission, told Radio New Zealand today that all robotic video footage was offered at the time to be shown to families by police.

However, families were also advised the footage didn't show anything new that hadn't already been shown in selected extracts. Raymond said the newly-published footage would have been significant to the commission and families.

New Zealand First leader Winston Peters says there has been a "cover-up", and today reiterated earlier statements a manned entry into the mine's drift would be a bottom-line for his party in any negotiations to form a Government.

"How many times have I said that?...I know that you journalists might have a hard job understanding what a commitment is, and keeping your word, but I don't. A bottom-line is non-negotiable...it is not up for negotiation."

"The families have said they are happy to assume [legal] responsibility...these families are prepared to take the risk themselves. And so would I."

Labour MP Clare Curran said the party would ask Parliament's commerce select committee to reopen its petition calling for Solid Energy not to seal the mine.

"There are urgent questions that need to be asked about the effect this new information has on the expert opinions being relied on by Solid Energy and the families as to the safe re-entry of the Pike River mine."

In 2011, Police said videos taken via borehole 47 in the mine had been viewed by a senior forensic pathologist, who believed an image looked like a fully-clothed person lying face down.

Send robot in, may get stuck like the other two in there. What has to happen is a team of mine rescue people walks to the drift and if safe to do so recovers any human remains. Then get out of mine and seal it. End of ordeal.