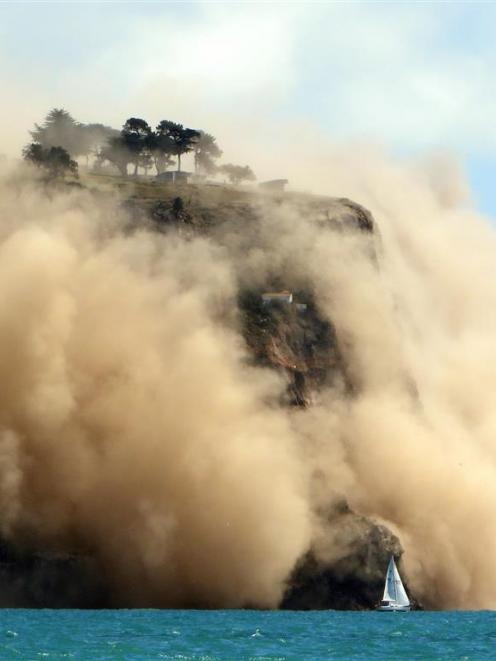 Photo by Andy Winneke.
The psychological shock for Christchurch people of yesterday's ‘‘severe'' earthquake should not be underestimated, a University of Otago academic says.

Associate Prof Karen Nairn said many people would have got their hopes up that the worst of the quakes was behind them, after a relatively quiet period of more than a year since previous big aftershocks.

Yesterday's psychological shock would have been accordingly greater, reviving ‘‘all those fears and concerns'' and ‘‘probably makes them wonder'' if they wanted to ‘‘move out of Christchurch'', she said.

Prof Nairn, of the university's College of Education, is part of an Otago multi-disciplinary study of ‘‘Dislocation Following the Christchurch Earthquake''.

This research has focused on the experiences on children and young people who moved away from their Christchurch homes after the two big quakes in 2010 and 2011, many to other places in New Zealand.

The 5.7 magnitude quake was only a week from the fifth anniversary of the 2011 disaster which killed 185 people.

Becky Gane, whose 27-year-old husband Adam Fisher was one of those who died, said the shake ‘‘took me straight back to that day''.

‘‘Physically, my heart was racing. I instantly thought of where everyone was and if anything had come down,'' Ms Gane said.

This time of the year was always the hardest for Ms Gane and her two young sons, Jack (8) and Ashton (4).

‘‘I always get anxious around this time. You're already thinking about the earthquakes more and I just freaked out today,'' she said.

Maan Alkaisi, who lost his wife, Dr Maysoon Abbas, in 2011, said he was at home and had to rush into the hallway with his daughter.

‘‘You want to forget and then something like this happens and brings everything back,'' he said.

‘‘We in Christchurch, we know that it can happen, so it's not out of the blue, but because we are thinking about the fifth anniversary [next Monday] it just makes it a little bit harder.''

Canterbury District Health Board chief medical officer Dr Nigel Millar said the Valentine's Day quake was ‘‘terrible timing'' for Cantabrians who were gearing up for the fifth anniversary of the deadly 2011 disaster.

Yesterday's shock would have undoubtedly brought back a lot of memories and emotions, but he added that might not necessarily be a bad thing for Christchurch.‘

‘You have to remember these things; you have to honour the past,'' he said.

Tex Walls, whose partner and 6-year-old daughter almost died after being crushed by rubble in February 2011, said the quake ‘‘was a massive step backwards''.

‘‘It's been a while since we've had a big one and every year the month of February is hard, but it kind of gets a bit easier,'' Mr Walls said.

Glenn Conway, a former Otago Daily Times reporter who suffered a head injury while working in The Press newspaper newsroom in the 2011 quake, said yesterday's aftershock made him ‘‘freeze up'' in terror.

‘‘It didn't feel like much to start with and then it just built up and up. To be honest, today brought February 22 back for me for quite a while,'' Mr Conway said.

‘‘I think a lot of people will be quite shaken up today,'' he said. University of Canterbury Prof Neville Blampied, who heads up the psychology department, said not only would the quake bring back memories, it would also bring back ‘‘vigilance and resilience.'

'For those who suffer painful memories from 2011, the Valentine's Day quake would have ‘‘more psychological potency.''

‘‘I think it would have been a difficult reminder of all that happened and our vulnerability to the powerful forces of nature, but don't give into those feelings of helplessness and despair,'' he said.

Additional reporting by Olivia Carville, of The New Zealand Herald.