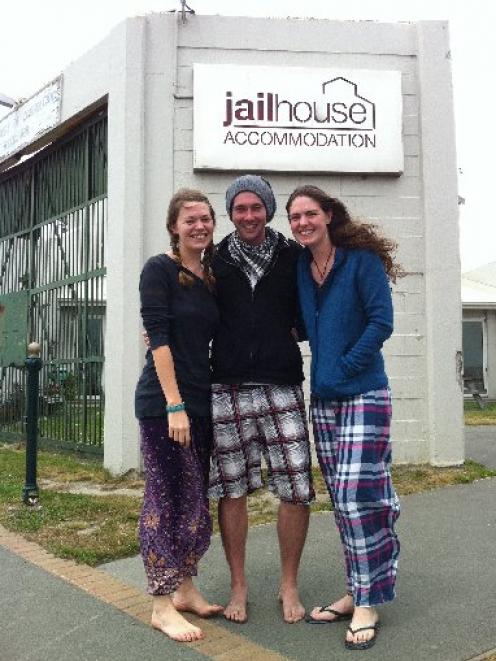 Liz Lane, Stuart Mairs, and Jen Lane are three UK backpackers who refuse to be put off by Christchurch's shakes. Photo by APNZ.
Backpackers are still flocking to Christchurch as a must-stop destination, despite the earthquake-ravaged city's ongoing shaking.

Travel guide and backpackers' bible Lonely Planet this week labelled the city as one of New Zealand's "most exciting", with the glowing endorsement welcomed as a boost for the city's ailing tourist industry.

And yesterday, with the city bathed in dry, balmy weather, the streets were full of wandering, young visitors from all over the world keen to take in the sights.

Stuart Mairs (29), from Scotland, has been impressed by what he's seen since he landed after a long-haul flight from the UK three days ago.

He summed up the thoughts of many backpackers when he said: "It will take more than some earthquakes to stop me coming.

There are still things to do in Christchurch - it's not a 'no go' area."

The Glaswegian has been reassured about the city's safety after speaking to local Cantabrians over a pint.

"I didn't have any real fears about coming to Christchurch, but I did think the worst of the earthquakes had passed.

"After talking to folk since I've been here, the quakes have obviously not stopped, but they have been very reassuring about it all and given me some confidence that it's not that bad.

"I've liked what I've seen so far and the people are great. I'm wanting to stay and get a job."

He is staying at the Jailhouse youth hostel in Addington, which was highlighted by the Lonely Planet review as being the city's "most dynamic neighbourhood".

Also staying at the Jailhouse are English sisters Liz and Jen Lane who touched down on Thursday night.

Liz (24) said she visited two years ago and went kayaking on the river Avon, and visited the now devastated Christchurch Cathedral.

"The city centre and especially the cathedral were just beautiful.

"We're planning on taking a walk around the cordon tomorrow and I think it will be very sad to see.

"But the city has a lot more to offer and we're not going to be put off."

Her 26-year-old sister Jen said she had planned to leave the city as soon as she landed at Christchurch airport but she has liked what she has seen and plans to stay.

"I saw coverage of the December 23 earthquake on the news in the UK and wondered what I was doing flying to a city like that. I thought I would get out of Christchurch as soon as I arrived, but now that I'm here, I realise it's OK. It's nice to stay here and spend some time and help out the local economy a little bit."

Kathryn Richmond, acting accommodation manager for the Christchurch YMCA, was delighted with the rave reviews from Lonely Planet.

She said they have been "flat out" , with a 95% occupancy rate for their 105 rooms during the past month.

"It's been unbelievable," Ms Richmond said. "We've been almost full every night.

"There is still a lot to do in the city - the World of Wearable Art exhibition at the museum, walks around the CBD red zone cordon.

And then we're sending people on trips to the beach at Sumner, and over the hill to Akaroa, and Hanmer Springs.

"The Lonely Planet review was great because we get a lot of tourists mentioning that publication, so it's very important to get a good write-up."

Christchurch and Canterbury Tourism chief executive Tim Hunter said although the cityscape had been changed forever, the Garden City is still "a very special place and a beautiful gateway to the South".